Yesterday CIA Director Leon Panetta emailed thousands of subordinates his hearty greetings for Passover and Easter. Appropriate to the season, perhaps, his message was filled with talk of torture, foreign captivity, and doubtful acts of contrition. “CIA officers do not tolerate, and will continue to promptly report, any inappropriate behavior or allegations of abuse,” he wrote. And this rule was not to be evaded by proxies, either: “That holds true whether a suspect is in the custody of an American partner or a foreign liaison service.”

He also spoke about the decommissioning of the system of black sites constructed in the Bush era to hold prisoners outside of any form of accountability. “I have directed our Agency personnel to take charge of the decommissioning process,” he wrote. “It is estimated that our taking over site security will result in savings of up to $4 million.” Some of these black sites are now the subject of criminal investigations seeking to ascertain whether crimes were committed there. One wonders what sort of care Panetta’s agents will take to preserve evidence of what transpired there, and what the criminal investigators think about the CIA “taking charge” of the process.

Panetta also provided assurances that “No CIA contractors will conduct interrogations.” Many of the most serious cases of abuse of prisoners involve CIA contractors. I am aware of a single case in which a CIA contractor was actually prosecuted. Remember Abu Ghraib? The Defense Department’s investigation concluded that the most serious offenses against detainees there were committed by contractors. As Major General Antonio Taguba noted, several of these individuals had clear-cut and continuing high-level connections to the intelligence community. Some purported to be contractors for the Interior Department, but the facts strongly suggested a relationship to the shop Panetta now heads. This group of contractors were investigated by the military, which turned over a full portfolio of evidence to federal prosecutors in the Eastern District of Virginia, recommending prosecution. What happened? Nothing. In the meantime, however, a group of young NCOs and enlisted personnel who acted under the influence of the contractors were court-martialed. Another demonstration of the Bush Administration’s total perversion of our justice system. 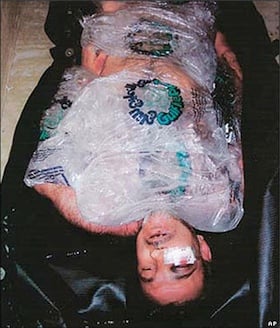 Or consider what Congressional Quarterly’s Jeff Stein calls “The Mysterious Case of Mark Swanner.” The Army’s Criminal Investigation Detachment studied the death of Manadel al-Jamadi (photo left), who died in Swanner’s custody, and concluded that he had been murdered. Swanner, a long-time CIA officer, was fingered as the perpetrator, and the case was referred to the U.S. Attorney in the Eastern District of Virginia for prosecution. That was 2004. So five years later, what has happened? Nothing happened.

Note the contrast: the Bush Administration aggressively prosecutes a bunch of grunts. But the military’s investigation showed that these enlisted personnel and NCOs were actually operating under the direction of a mysterious group of contractors. And it also concluded that a CIA officer was responsible for the one clear-cut homicide to emerge from Abu Ghraib–an individual who was literally tortured to death. The bit players are prosecuted, but the instigators, the individuals who bore real responsibility for what happened? They’re handed over to the crack “fast-lane” prosecutors in Virginia, the most political crew of a highly politicized Justice Department, and nothing happens.

Why? The Bush Administration issued a license to the CIA to torture and kill. The Justice Department itself was smack in the middle of this process, offering assurances that there would be no prosecutions. Moreover, a prosecution, had it been brought, would likely have resulted in disclosure of many uncomfortable details—how Bush cabinet officers approved not only techniques, but even specific torture programs, for instance; how the Justice Department itself connived in the entire process. A prosecution might have brought the truth close to the surface. Can’t have that. Is there any chance that this process will be reversed by the Obama Administration?

So far, every sign runs in the opposite direction. Panetta’s pastoral missive offers absolution: “Officers who act on guidance from the Department of Justice—or acted on such guidance previously—should not be investigated, let alone punished. This is what fairness and wisdom require.” He adopts the “go forth and sin no more” approach.

But start with the fact that much of the worst abuse occurred well before the first of the Justice Department’s torture memoranda, from August 2002. How exactly were CIA agents relying on “guidance from the Department of Justice” that had not yet been issued? They weren’t. Note that the Justice Department’s letter in response to the ACLU’s FOIA request stated that the 92 tapes that the CIA destroyed (in yet another criminal act) were made between April and December 2002. The Justice Department acknowledges that these tapes would have contained evidence of torture. Therefore we know that the CIA was implementing the Bush torture program a half year before John Yoo came in to craft his infamous torture memo. Moreover, Yoo was brought in to write only in response to push-back from CIA officers and others who properly labeled these techniques as unlawful.

Now the CIA and the Obama Justice Department have locked arms in an act of open obstruction: on Thursday they wrote the judge overseeing the FOIA litigation that they will produce no evidence from the period before the issuance of the Justice Department’s opinion. It’s not that such evidence doesn’t exist. It’s that the evidence would establish criminal conduct for which Panetta’s defense of “reliance on advice of counsel” doesn’t work. We are witnessing something akin to an institutional invocation of the Fifth Amendment, and in an act of ultimate perversion, it is being asserted by prosecutors.

Leon Panetta’s promise of absolution is being implemented—by way of cover-up. And the Eric Holder Department of Justice is complicit at every step along the way.

I am sympathetic to Panetta’s predicament to some degree. I strongly advocate accountability, but it would be unreasonable to focus on ground-level agents who were implementing decisions taken high-up in the government. The accountability process should focus on those who adopted torture as a matter of policy and those who pushed it through over internal opposition. That includes the lawyers who have become the targets of a criminal case in Spain, who are prime actors in this process. And it includes a handful of senior figures in the CIA, several of whom have emerged as Panetta’s closest advisors. As John Sifton notes in today’s Daily Beast:

Accountability… should focus primarily on executive-level directors, such as the current CIA Deputy Director Stephen Kappes and Michael Sulick, the director of the CIA’s National Clandestine Service—both high-level officials in the CIA’s operations directorate when the worst detainee abuses were committed. Investigations should focus also on high-level executive officers in the CIA’s Counterterrorism Center (CTC) who are still at the agency, for example, G— —, a former deputy to Jose Rodriguez, the chief of CTC back in 2002-2004 and who now enjoys a prestigious CIA station-chief posting in Europe.

These individuals are giving Leon Panetta plenty of advice today, and that advice serves their interests, but not those of the CIA or the United States. But the real burden falls squarely on the shoulders of Attorney General Eric Holder. He took an oath to enforce the law. The torture controversy is the darkest moment in the entire history of the Justice Department. The only way forward involves exposing what was done to the ultimate disinfectant–bright, unrelenting sunshine. Repressing the facts won’t keep them from coming out. It will only make the process longer, more painful, and more damaging to the reputation of the institutions involved.