Cologne’s Wallraf Richartz Museum has launched an impressive new exhibition entitled “Vincent van Gogh: Shoes,” built around a celebrated painting by the Dutch master from 1886. Some might wonder how an exhibition can be framed around a single work with such a modest subject matter, but the curators provide us an impressive model. The exhibition focuses on the extraordinary role this painting has played in modern philosophy surrounding art, its reception, and its relationship to the history of ideas. A half dozen philosophers and art historians have written about van Gogh’s painting of shoes, including Martin Heidegger, Meyer Schapiro, and Jacques Derrida. The exhibition takes us on a trip through their writings—sometimes comic, occasionally downright rude, and often exhilarating. These thinkers certainly bar no holds in their clamber to be exceedingly profound. 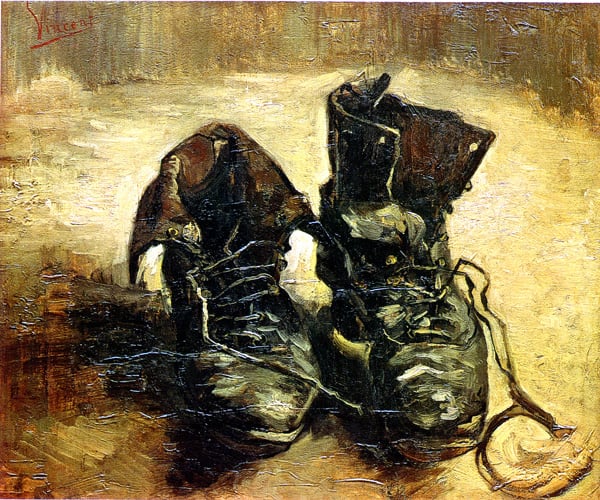 We should start with the facts now established as to the origins of this painting. In 1886, van Gogh visited a Paris flea market and came across a pair of worn-out shoes. He bought them and brought them back to his atelier in the city’s Montmartre district. It’s not clear why he bought them, but it could be simply that he needed a new pair of shoes. Apparently, he did try to wear them and found the fit impossible. Instead, he decided to use them as a prop for painting, and the shoes soon became the most celebrated footwear in the history of modern art. But that may be less the direct result of van Gogh’s painting than of its critical reception by eminent writers.

Martin Heidegger saw the painting on exhibition in Amsterdam in 1930. The experience came to play a focal role in an essay he was writing on the theory of art. Here’s his oft-quoted description of the painting in The Origin of the Work of Art (1935):

From the dark opening of the worn insides of the shoes the toilsome tread of the worker stares forth. In the stiffly rugged heaviness of the shoes there is the accumulated tenacity of her slow trudge through the far-spreading and ever-uniform furrows of the field swept by a raw wind. On the leather lie the dampness and richness of the soil. Under the soles slides the loneliness of the field-path as evening falls. In the shoes vibrates the silent call of the earth, its quiet gift of the ripening grain and its unexplained self-refusal in the fallow desolation of the wintry field. This equipment is pervaded by uncomplaining anxiety as to the certainty of bread, the wordless joy of having once more withstood want, the trembling before the impending childbed and shivering at the surrounding menace of death. This equipment belongs to the earth, and it is protected in the world of the peasant woman. From out of this protected belonging the equipment itself rises to its resting-within-itself.

This is the sort of language that only Heidegger could write; his wordplay is eccentric and not easy to approach. So Heidegger sees these shoes with many layers of meaning, but in the end he sees an artist conceptualizing and presenting the essence of “shoeness.”

In The Still Life as a Personal Object (1968), Meyer Schapiro takes Heidegger to task for falsely understanding the subject matter. Why does Heidegger think these are the shoes of a peasant woman? Schapiro, plunging deeply into van Gogh’s correspondence and ephemera and the writings of his friends, shows that they are not women’s shoes. Heidegger’s rather excitable imagination has gotten the better of him, Shapiro charges. And then he gives the painting his own best take:

When van Gogh depicted the peasant’s wooden sabots, he gave them a clear, unworn shape and surface like the smooth still life objects he had set beside them on the same table: the bowl, the bottles, etc. In the later picture of a peasant’s leather slippers he has turned them with their backs to the viewer. His own shoes he has isolated on the floor and he has rendered them as if facing us, and so individual and wrinkled in appearance that we can speak of them as veridical portraits of aging shoes.

And then we come to Jacques Derrida. Predictably, Derrida sees the truth neither in Schapiro’s nor in Heidegger’s encounter with the shoes, but rather in something beyond either of them. He takes Schapiro to task, arguing that he doesn’t really see what Heidegger is up to—in Heidegger’s example, a chalkboard sketch could have served just as well as the van Gogh painting. Here’s a snippet:

[T]here is another line, another system of detaching traits: this is the work qua picture in its frame. The frame makes a work of supplementary désœuvrement. It cuts out but also sews back together. By an invisible lace which pierces the canvas (as the pointure ‘pierces the paper’), passes into it then out of it in order to sew it back onto its milieu, onto its internal and external worlds. From then on, if these shoes are no longer useful, it is of course because they are detached from naked feet and from their subject of reattachment (their owner, usual holder, the one who wears them and whom they bear). It is also because they are painted: within the limits of a picture, but limits that have to be thought in laces. Hors-d’œuvre in the œuvre, hors-d’ œuvre as œuvre: the laces go through the eyelets (which also go in pairs) and pass on to the invisible side. And when they come back from it, do they emerge from the other side of the leather or the other side of the canvas? The prick of their iron point, through the metal-edged eyelets, pierces the leather and the canvas simultaneously.

The word “pointure” that Derrida uses is so important to his essay that he uses it in the title (Restitutions of the Truth in Pointing [‘Pointure’], 1978) and puts a dictionary definition up front as an epigram: “old synonym of prick. Term in printing, small iron blade with a point, used to fix the page to be printed on the tympan. The hole which it makes in the paper. Term in shoemaking, glovemaking: number of stitches in a shoe or glove.” Derrida follows in Heidegger’s tracks as a word artist, but exceeds him with his polyglot dexterity. His essay hurls about terms in German, English, French, and Latin and at one point invites us (followed by a quarter page of ellipses) to read the Heidegger text successively in German, English, and French before resuming his discussion.

What, one wonders, would Vincent make of all of this? What did he really mean by those shoes? Sometimes shoes are just shoes, but the visitor coming away from this exhibition may realize that a pair of shoes can contain an entire universe.