This month’s issue of Harper’s Magazine features ”The Water of My Land,” a portfolio of photographs by Samuel James, who spent two months this past February photographing life in the riverine communities of the Niger Delta. Nigeria is the largest oil producer in Africa and the fifth-largest supplier of oil to the United States, but many delta residents have been shut out from this multibillion-dollar industry, and so have resorted to the clandestine trade of bunkering crude oil and refining it themselves.

Through his photographs, James hopes to convey how communities engaged in this relentless and destructive practice are risking everything, including the river upon which their lives depend, in order to survive. I spoke with him at the Harper’s offices in New York City about some of his pictures: “This man is preparing for a night of cooking diesel. The boat behind him contains crude oil that was bunkered from a pipeline close by. Right now it is low tide, revealing oil stains on the roots of the mangroves. These are from oil spills and waste emanating from the refineries, which have suffocated all life in the water. Expansive ‘dead zones’ that look like this are scattered throughout the Niger Delta.” “The refining process itself is extremely risky. It requires boiling crude oil at high temperatures, then channeling the vapors into a cooling chamber filled with water. The technology is very rudimentary. For generations, men in the Niger Delta used this same process to distill palm sap into a potent gin known locally as Ogogoro. Sometimes wood fires such as the one in this image are used to boil crude. But more often, workers fill open pits with crude oil and light them on fire. The fumes and waste produced are toxic and flammable. Whole camps can, and often do, explode. You can tell where diesel cooking is going on because people are burned all over their bodies.” 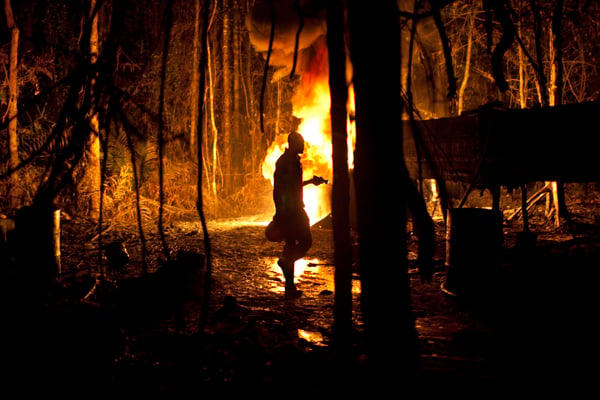 “Here, a man is working with a flashlight, manually tossing crude oil into burning pits to keep the refining process going. He is cooking under cover of night in order to evade the roving militias and government authorities who track the smoke from these operations. The river is very quiet during the day, with very few boats on the water. But when you move through the hidden channels at night, you see a swirl of activity. Surrounding you on the riverbanks are roaring bursts of light as workers toss crude oil onto the fires. The flames explode momentarily then simmer down again into darkness.” “In 2009, the federal government instituted an amnesty program whereby militants disrupting the oil industry in the delta were invited to lay down their arms in exchange for a small stipend. The major militant commanders were granted multimillion dollar contracts, and there has since been an uneasy peace in the creeks. However, the fundamental issue of mass unemployment has yet to be addressed. Here, a group of ex-militants are unloading drums of diesel at a jetty. This work is provisional and unreliable. Many complained that it paid far more to carry a gun.” “This is a jetty where diesel fuel gets unloaded from the creeks to be sold to local fueling stations. This particular community’s entire economy revolves around the trade. Depending on shipments coming in from the creeks, you’ll find entire families working down at the jetty. Young men will unload the 300-pound drums from the boats. Groups of children will then gather to push them out of the water and into the mud, where their mothers will siphon the fuel into smaller jerricans. Here, a man has come to sell ice cream out of the back of his motorcycle to children who have finished work for the day.”