Working on the Railroad

Uncle Sam? Not much

I’ve been reading a lot lately about massive government investments in high-speed rail — in England, that is. It seems that David Cameron’s Conservatives agree with their Labour predecessors that despite the huge public expenditure — estimates range from $52 to $72 billion — there’s something to be gained from shortening the time it takes to get from London to various points north.

Such bipartisan, non-ideological cooperation would be unthinkable in Washington, where politicians are content to let Amtrak creak along on a starvation budget, appropriating just enough money for members of Congress to claim credit for keeping the train station open in Dogpatch. But I don’t live in Dogpatch — I live in the great metropolis of New York City — and I remain flabbergasted at the poor quality of train service in the Northeast Corridor, as well as the political indifference shown by politicians who “serve” the region. 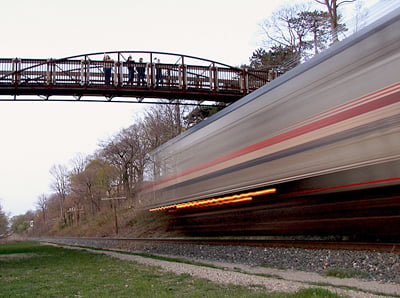 I once wrote a piece lamenting a trip I made to Utica on the Lake Shore Limited, but by now I’ve all but given up on the possibility of America’s long-distance trains being restored to their former glory. The trip my family took, in December 1966, on the Santa Fe’s elegant Super Chief is among my happiest memories — especially riding with my father in the domed observation car through darkened Joliet, with fires from the city’s steel and coke plants burning brightly, and eating a jelly omelet in the first-class dining car. But the generation of railroad men and passengers who cared for such things is long gone. I went to school near Chicago with the sons of two railroad presidents — John Reed of the Santa Fe and Worthington Smith of the Milwaukee Road — and I can say with assurance that businessmen of such admirable integrity don’t get to the top of corporations anymore.

Nevertheless, I don’t think it’s too much to ask for decent, European-style train service in what is not only the most densely populated section of the United States but likely also the richest stretch of urban geography in the world. I take the chronically mediocre, supposedly high-speed Acela fairly often to Boston, Providence, and Washington; no one needs to tell me how much faster and better it could be. But to refresh my knowledge, I recently made a round-trip to New Haven, just to remind myself of what we’ve lost and of the potential benefits if we take trains seriously again.

New York’s acoustic-tile-ceilinged, fluorescent-lit Penn Station remains what has to be the worst, most dispiriting major transportation terminal in the world, though my latest visit, post–rush hour on a Thursday morning two weeks ago, was relatively painless. My ticket seller was cordial and patient in explaining the differences between a $76 round-trip on the Northeast Regional and a $140 round-trip on the Acela, and I learned from my ticket folder that May 12 is National Train Day.

Waiting under the train board for the track to be announced (there’s no space for benches), I was tempted to jump on the glamorous-sounding Silver Star to Miami, scheduled to leave at 11:02, two minutes after my Northeast Regional #172, but I stuck with my plan. Despite the ugliness of Penn Station, I was happy to be spared the airport security drill and even happier when my train lurched into motion exactly on time. The café car was staffed by a kindly soul, and my $4.75 fruit and granola yogurt parfait along with my $2 coffee made for an adequate meal. As we looped east, then north through Queens, over the spectacular Hell Gate Bridge, then across Randall’s Island and past the New York Post printing plant, I started to think that maybe “regular” Amtrak wasn’t so bad, even when it bumps along at fifty to sixty miles per hour.

On the advice of my editor, I had invented an itinerary, including a quick tour of the Yale University Art Gallery, so I began to watch the clock very closely. Only if the train was on schedule would I be able to see some paintings and catch the returning Acela to New York to make a 4 p.m. appointment. The train arrived right on time at the hollowed-out wreck known as Bridgeport, then four minutes early, at 12:34, at New Haven (which is Paris by comparison to Bridgeport), whose handsome beaux-arts, Cass Gilbert–designed Union Station puts New York City’s hideous 1960s’ terminal to shame. Ten minutes later I was admiring Eakins’s Taking the Count, after marveling in front of Van Gogh’s Café de Nuit, Trumbull’s Washington at Trenton, and Bonnard’s Place Pigalle at Night.

A great university gets the art, the romance, and the train station it deserves. Why not the trains and speed to match?

Returning to Amtrak blandness on the frigid westbound platform, I was pleased to observe a crew preemptively de-icing the eastbound platform with liquid calcium chloride, in anticipation of the coming blizzard. Still, what’s the point of the Acela and the extra $32? It couldn’t be my $8 “Tuscan Panini,” which turned into a soggy mess after microwaving. True, I skipped Bridgeport in a bit of class-conscious scheduling. But my front-end-of-the train coach car made a squeaking sound every time we jerked a little and at 2:10 a last call was announced in the café because of a “scheduled break,” even though we weren’t due into New York for another half an hour. Shabbiness thy name is Amtrak.

My Acela did arrive on time (one of 85.4 percent to do so in the past twelve months), but so what? While the train briefly hits 150 mph north of New York, it averages somewhere in the seventies between Manhattan and Boston because the tracks can’t handle anything faster. The telling comparison is not with the Northeast Regional but with Metro North’s New Haven Line commuter train out of gorgeous Grand Central, which takes the more direct route through upper Manhattan to New Haven. The 10:03 Acela takes one hour and twenty-seven minutes to reach New Haven, for $70. The off-peak 10:07 Metro North takes just thirty-three minutes longer and costs $22. Shocked? Not enough. In 1963, the year New York’s magnificent old Penn Station was demolished, the New York, New Haven, and Hartford Railroad ran its fastest train, from New York’s Grand Central to New Haven, in one hour and twenty minutes, seven minutes faster than the present-day Acela.

President Obama has acknowledged the menace of global warming, so why did his 2009 stimulus package contain only $8 billion for railroad infrastructure improvements, including high-speed rail? According to the World Land Trust carbon dioxide transit calculator, a medium “petrol”-run automobile produces .03 tons of CO2 over the roughly eighty-mile journey from New York to New Haven, while a train will produce one third that amount per person. Obama says we need more middle-class jobs, so why not put tens of thousands of people to work — for $15 an hour instead of the meager $9 minimum wage proposed by the President — upgrading the tracks and roadbeds?

In a flight of fancy, Amtrak announced in December that beginning in 2017 it intends to replace the Acela with new, faster trains. But to build tracks and new tunnels in the Northeast Corridor that would truly justify the purchase of more modern equipment — imagine Philadelphia to Boston in two and a half hours and New York to Washington in ninety-four minutes — would cost $151 billion and take until 2040, according to Amtrak’s estimate. So far, the Administration has proposed spending only $47 billion for a “National High Performance Rail System” over the next six years.

Monet did wonderful renderings of Paris’s St. Lazare train station. When I next visit Yale to see his Camille on the Beach at Trouville, I might make the journey in a car instead of on Amtrak. It’s cheaper and it might save time.

How I learned the real meaning of dissent

From a conversation between Robert Caro and John R. MacArthur, marking the fortieth anniversary of the publication of The Power Broker, Caro’s biography of Robert Moses, which won the Pulitzer…

When I began my tenure as publisher of Harper’s Magazine nearly thirty years ago, my biggest challenge — or so I thought at the time — was to get advertising…