The Drakes Bay Oyster Company sits on a picturesque lagoon in the Point Reyes National Seashore, a dramatic, windswept peninsula jutting into the Pacific about forty miles north of San Francisco. The setting is pristine, and roughly 2.5 million people visit the park each year to walk its vast empty beaches, birdwatch in its foggy woods, and stroll through its meadows of high grasses. On a clear spring day, you can hike up a rocky bluff and watch pairs of calving grey whales migrate north through the emerald waters below, one blowhole exhalation at a time.

Point Reyes is a hallowed piece of the National Park System, and its history is a triumph of environmental policy over the greed of man. At one point late in the development-happy 1950s, a group of businessmen began to eye the peninsula, with visions of a coastal development featuring shopping malls and parking lots like those that have since bisected much of southern Marin County. Aghast, the area’s ranching and farming families, many of whom had roots there dating to the mid-1800s, teamed up with the Sierra Club and the government to work out a deal. Landowners received long-term leases, renewable for generations, and the National Park Service (NPS) took over a prize piece of real estate. The chapter stands as local folklore, with an evident lesson to the two dozen or so families still working leases in the national parkland: a commitment to the environment is all that stands between Pacific splendor and another Jersey Shore.

But this solution brought its own set of problems. Walled off from market forces, the park became a stage on which endless struggles of environmental law and policy play out: public land versus private business, wilderness versus agriculture, and, in the discouraging case of the Drakes Bay Oyster Company, politics versus science. Seven months and four lawsuits ago, then Secretary of the Interior Ken Salazar ordered the family-owned oyster farm to clear out of the lagoon — part of an ecologically sensitive bay known as Drakes Estero[1] — where it has been producing oysters since the mid-1930s.

The environmental establishment[2] cheered the decision, but some influential progressives in the Bay Area were appalled, and when the farm refused to leave, the fight escalated and drew in a peculiar assortment of bedfellows. Alice Waters, California’s culinary eminence and a pioneer of the farm-to-table movement, signed on to a federal-court brief filed on the farm’s behalf, putting her on the same side as Louisiana senator David Vitter (R.), who included a clause on a sweeping G.O.P. energy bill — one permitting the Keystone XL Pipeline to be constructed and the Arctic National Wildlife Refuge to be drilled for oil — to grant the oyster company another twenty years on its lease. California senator Dianne Feinstein (D.), the farm’s leading advocate in Washington, co-sponsored a separate Vitter budget-resolution amendment that sought the same lease extension. Shortly before Salazar issued his eviction notice last November, Michael Pollan, the bestselling author and national conscience on sustainable food, wrote in an open letter to Salazar and Feinstein that “it would be a shame — in fact an outrage — if the company were closed down as a result of the Park Service’s ideological rigidity and misuse of science.”

For Pollan, Waters, and other progressives, the farm epitomizes an agricultural future in which small, conservation-minded producers build sustainable local food economies.[3] Environmentalism is central to this philosophy, but in an interview with the New York Times,  Bay Area restaurateur Patricia Unterman characterized the environmentalists’ mindset as “doctrinaire and unnuanced.” The farm she described as “a rare and beautiful use of land and water” is viewed by the Sierra Club as an unholy industrialization of a beloved national park.

Though the case will ultimately be decided by the 9th Circuit Court of Appeals later this summer, the environmental lobby has been waging a public-relations blitz to stir passions among its donor base. In interviews, blog posts, op-eds, and fundraising pleas, the movement has played loose with the facts, its claims becoming enmeshed with the national partisan air war: Thanks to Senator Vitter’s support, the oyster company is part of a “big oil agenda.” Since the company (temporarily) accepted pro bono legal help from a conservative outfit in Washington, D.C., it has “close ties to the ultra-conservative Koch brothers.” Worse still, one editor at the East Bay Express darkly informed his readers, “The farm’s owners, Kevin and Nancy Lunny, also have repeatedly appeared on Fox News to promote their campaign.” Kevin Lunny, the oysterman in question, grew up on Point Reyes, the grandson of a rancher. He stuck with the family business, and when the food movement boomed he was well-suited and well-situated for the times. His livestock were the first certified-organic beef cattle in Marin County, and today you can buy Lunny Ranch grass-fed, organic beef in the area’s Whole Foods markets. He sits on the board of the local organic-producers’ association, earned an award from the Society of Rangeland Management for best practices in California, and, in 2004, with an eye on expanding the family business for his children and grandchildren, bought the oyster farm from an aging neighbor. Oystering was a gamble; there was no guarantee that the government would renew the farm’s forty-year lease, and he knew that Drakes Estero was listed by the Department of Interior as “potential wilderness,” an elastic word of ill portent.

But with assistance from the National Park Service, Lunny invested money and time in cleanup and modernization; in 2007, he was even featured in an NPS booklet called Stewardship Begins with People. “From our house, we look out over the oyster beds and the estuary every day,” he is quoted as saying. “It’s a beautiful view and it’s something that we love and cherish. We’re deeply committed to that ecosystem and its protection.” 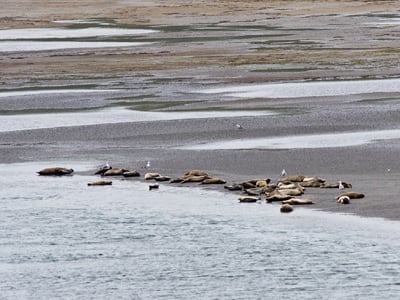 Just months after publishing Stewardship Begins with People, however, NPS released a revised edition with Lunny’s image photoshopped out and his quotations redacted. Even as the park service had publicly celebrated Lunny, it was building a case against him. In 2006, it had intensified its scrutiny of the farm, ordering wave after wave of studies and reports on the oyster farm’s environmental impact on the estuary. Two hidden surveillance cameras snapped nearly 300,000 photos over three years, aiming to prove that boats used for gathering oysters from different areas of the bay were disturbing a nearby colony of harbor seals, who had become the focus of the agency’s case. But the seals typically bask on sandbars 700 yards from the nearest farm equipment, and the report raised immediate flags.

On April 28, 2007, a Marin County Supervisor put in a call to Dr. Corey Goodman, a former Stanford biology professor and a member of the National Academy of Sciences (NAS), to review the case. Goodman was shocked by what he found. Data so simple, he told me, “any high schooler or junior high schooler could understand it,” was riddled with errors. When Feinstein asked for a formal NAS review, their verdict was that the park service had “selectively presented, over-interpreted, or misrepresented” the science. Gavin Frost, an NPS solicitor who also reviewed the case, found that his agency was “blurring the line between exploration and advocacy.”

With the park service’s science being roundly debunked, Salazar ordered it in October 2009 to conduct an updated Environmental Impact Statement, which it did, and which was later found also to include stunning misrepresentations. One of these involved noise measurements that allegedly proved Lunny’s oyster boats were disturbing the seals, but that turned out to be from a seventeen-year-old study of jet-ski noise in New Jersey. “I have followed this saga for several years now,” Pollan wrote to Salazar and Feinstein last fall, “with a mounting sense of wonder and disappointment in the behavior of the Park Service.” Feinstein has been just as direct. Last spring, she wrote that the Park Service “has repeatedly misrepresented the scientific record since 2006 to portray the farm as environmentally harmful.”

But the time had come to turn “potential wilderness” into the real thing. When Salazar made his final ruling, he sidestepped the thicket of bunk science, acknowledging that it “had generated much controversy,” and claimed that his “decision is based on matters of law and policy” — put simply, the government was under no obligation to renew the farm’s lease. Salazar gave Lunny ninety days to clear out his equipment and assets, including $2 million worth of oysters.

The story of the Drakes Bay Oyster Company is at this point obscured by ideological fog. Even basic facts are being misrepresented. The environmental lobby insists, for example, that Drakes Estero will now become “the first marine wilderness area on the West Coast” outside of Alaska, a claim that has been repeated as fact by the New York Times, the Los Angeles Times, ABC and NBC affiliates in San Francisco, the local West Marin Environmental Action Committee, most national environmental organizations, and the Park Service itself. And yet according to the government’s own records, this isn’t true. As Salazar noted in his ruling, the Limantour Estero, which is adjacent to Drakes, was converted in 1999 “from potential to designated wilderness, becoming the first (and still only) marine wilderness on the Pacific coast of the United States outside of Alaska.”

This sort of casual regard for the facts[4] led Lunny to tell Fox Business News that the campaign being waged against him “embarrasses most environmentalists,” and is now describing the action as “wilderness activism.” With a decision from the 9th Circuit expected soon, the environmental lobby has been treating the case like the closing days of an election-season campaign. After contacting several different organizations in California and Washington, D.C., for comment, I learned that many of the country’s oldest and largest environmental groups have agreed that only two people — Neal Desai of the National Parks Conservation Association and Amy Trainer of the West Marin Environmental Action Committee — will speak on the record about Drakes Bay. One person I interviewed for this story, an environmental-law expert deeply familiar with the case, emailed me after an hour-long interview to ask me not to use anything that was said, even anonymously, out of fear of career-ending reprisal.

In Conservation and Local Economy, Wendell Berry writes, “The long-standing division between conservationists and farmers, ranchers, and other private small-business people is distressing because it is to a considerable extent false.” The Drakes Bay oyster war reveals the entrenching of this division thanks to political money and ideology. The oyster farm predates the national park by three decades, but for environmental groups that have invested heavily in the farm’s removal, any negotiation that allows it to remain has become unthinkable, an inexorable step toward strip mining the Grand Canyon. “As much as the Park Service and the Sierra Club would like to pretend otherwise,” Pollan writes, “Point Reyes National Seashore has been an agricultural community for nearly two centuries.” To ignore that entire history and insist on one definition of wilderness would, he said, “consign the place to being a museum to an idea.”