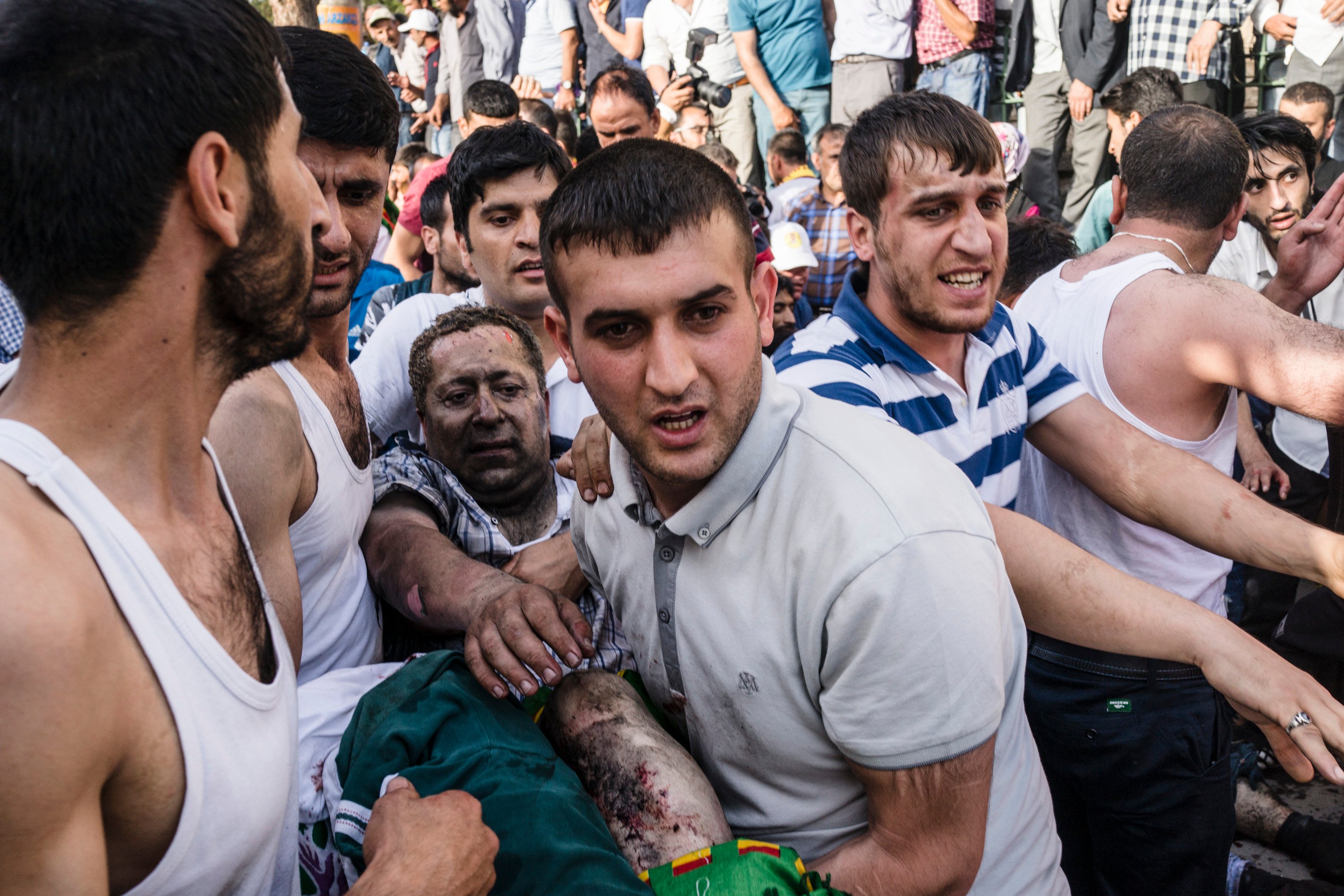 An injured man is carried away from the scene of a bombing during a HDP rally in central Dyarbakir, Turkey, on June 5th. All images © Guy Martin/Panos.

I heard the first, distant blast above the roar of the loudspeakers but could not tell what had happened. The last election rally of the Peoples’ Democratic Party (HDP) was in full swing in Diyarbakir, the Turkish Kurds’ cultural capital, and the party’s leader, Selahattin Demirtas, was minutes away from taking the podium. Those closest to the stage seemed alarmed by the noise. They turned toward the back of the crowd, part of which seemed to have been seized by something resembling a spasm. But the rally continued.

A few minutes later, some thirty yards from where I was standing, another, much louder explosion ripped through the crowd. Shreds of what must have been flyers or banners or posters flew into the sky. They danced for a moment amid the smoke, oblivious to the chaos spreading below, and began to fall.

The campaign music stopped. Hundreds of people, their faces now warped by the dread of a third bomb, began running for cover. Smaller groups followed in their tracks, carrying the wounded on their shoulders, leaving behind trickles of blood. A young woman, dressed in a green, yellow, and red gown, started crying.

A desperate, anguished chant came up from a group of young men near the stage: “Revenge!”

Inexplicably, Turkish police, who had been stationed nearby, fired several rounds of tear gas into the fleeing crowd. I clambered over an iron fence and jogged back to the square. An elderly woman running next to me gasped for air, her eyes red and moist from the gas, or from tears, or both.

Near the transformer where the second explosion took place, I saw a purple HDP banner, spattered with blood, along with an abandoned shoe. A man in an electric wheelchair arrived at the site, waved the flag of the Kurdistan Workers’ Party (PKK), an armed Kurdish group, and made a victory sign.

All told, the twin bombings on June 5 killed four people and wounded more than a hundred. An Islamic State sympathizer would soon be arrested in connection with the attack, but many in Diyarbakir blamed Turkey’s president, Recep Tayyip Erdogan. Bent on keeping the pro-Kurdish HDP out of parliament, Erdogan had repeatedly denounced the party in the run-up to the elections. At a rally held two days before the bombing, he had accused it of being in league with “terrorists,” “homosexuals,” and the “Armenian diaspora.” Revenge, for those desperate young men chanting after the bombing—and for many of Turkey’s 15 million Kurds—came at the polls.

On June 7, the day of the election, I joined Gültan Kisanak, the Diyarbakir mayor, and Nimetullah Erdogmus, a parliamentary candidate, in front of a television set at the party’s local headquarters. Results began to trickle in from the provinces. The group watched in awe. The cheers, at first cautious, grew louder. A man in a blue shirt, who was planted atop a coffee table, pumped his fists. Another man held his chest with his left hand and tugged at a neighbour’s shirt with his right, trying, and occasionally failing, to maintain his balance.

By 8 p.m., it had become clear to everyone in the room—and to everyone in the country—that the HDP had just turned Turkey’s politics on its head. The group had won over 13 percent of the vote, enough to become the first Kurdish party in Turkish history to enter parliament. It had won 80 seats, depriving the Islamist-rooted Justice and Development Party (AKP) of the governing majority it had enjoyed for the previous thirteen years. And in doing so, it had derailed Erdogan’s plans to overhaul Turkey’s constitutional order.

“There’s been a revolution in Turkey,” Kisanak told me, beaming. “We’ve managed to prevent one man rule.”

I asked Erdogmus, a former mufti, what this revolution might mean for the AKP government’s peace talks with the PKK, the armed group that has waged war against Turkish security forces for the past thirty years in the name of Kurdish autonomy.

The conventional wisdom, at least in policy circles, has been that only Erdogan, who led the AKP to three consecutive electoral victories since 2002, had the clout to reconcile Turks to the concessions needed to make peace with the PKK. Erdogmus did not buy it. “What today’s result shows is that maybe he wasn’t such a strong leader to begin with,” he said. “And if the AKP doesn’t read the message delivered today by Kurdish voters, it will be the beginning of the end for it.”

As night approached, I made my way out of the HDP office, past a throng of people waiting to congratulate Kisanak and Erdogmus, and into a scene of joyous mayhem. The anger bottled up since Friday’s bombing, infused with the anticipation bordering on certainty that the AKP would try to rig the election, had been poised to erupt into violence if the HDP were to fall short of the 10 percent needed to enter parliament. That anger now turned into elation. Ignoring calls to stay home, thousands of voters crowded the square opposite the HDP building, waving Kurdish and PKK flags. “We’re off to Parliament,” they chanted, intoning the words of the party’s campaign anthem. Cars and trucks filled with people honked wildly. Children basked in the glow of fireworks, unmoved by the occasional burst of celebratory gunfire.

“This is a victory for all of Turkey,” Ridvan Yaprak, a construction worker, yelled in my ear. “We’ll get rid of Erdogan once and for all.” The aftermath of the HDP party rally.

The HDP made it into parliament largely on the strength of voters who defected from the ruling party, especially conservative Kurds. But it also got a hand from Turkish secularists, liberals, young professionals, and the urban intelligentsia.

Just a few years ago, the party was widely considered a political fig leaf for the PKK, which Turkey and the United States label a terrorist group, and which most Turks revile. Today, it has reinvented itself as the most progressive force in Turkish politics. Partial Kurdish autonomy is still atop its agenda, but so are rights for religious and ethnic minorities, quotas for women, and an end to discrimination against the LGBT community.

The HDP’s transformation has been led by Selahattin Demirtas, its co-leader, who came close to joining the PKK as a young man, before reconsidering and becoming a lawyer. Demirtas steers clear of the kind of confrontational rhetoric with which Erdogan has polarized Turkey. He cracks jokes. He engages directly with voters, in person and through social media. He is young and oozes charisma. And he plays the saz.

He also manages to be different things to different constituencies, at least for the time being. Among liberals in the west of the country, he is often seen as the messenger of a new, progressive left. But to many Kurds in the southeast, he is only a spokesperson, though an undeniably talented one, of a larger movement headed by the PKK and its imprisoned leader, Abdullah Öcalan.

Some HDP politicians acknowledge as much. During a chance meeting on election day in Dokuzçeltik, a village on the outskirts of Diyarbakir, I had asked Süleyman Iskenderoglu, one of the HDP’s candidates, what steps his party would take if it failed to gain the votes needed to enter parliament. “It isn’t for us to say,” he told me. “It all depends on what Öcalan wants.”

Back home in Istanbul, I began asking Turkish friends how they felt about the election. Some had warmed to the HDP. Many remained sceptical. Demirtas and his party, they argued, would have to choose between an agenda designed to make them palatable to most Turks and an agenda shaped by the PKK. They would not be able to do both. “Demirtas might be the most inspiring leader in Turkish politics after Erdogan,” Can Eryilmaz, a manager at an IT company, told me. “He is entertaining, visionary, young and energetic, the politician I feel closest to,” he said. “But the HDP’s roots are with the PKK and with Öcalan. Even if I have sympathy for Demirtas, I can never vote for him.” About town with the aspiring lords of Byzantium