By Gary Indiana, from A Significant Loss of Human Life, one of twenty-two pamphlets published by Semiotext(e) for this year’s Whitney Biennial, which is currently on view at the Whitney Museum in New York City. Indiana is a writer, visual artist, and filmmaker; his Last Seen Entering the Biltmore: Plays, Short Fiction, Poems, 1975–2010 was published in 2010.

When New York ruins my day, I think about this terrace. I imagine myself sitting here, at this round glass table that easily seats twelve (I’m not sure we have that many chairs in the flat, but I could borrow some from a neighbor). I picture the zebra plants and majesty palms in terra-cotta tubs that line the terrace. I visualize Neyda rolling up the grimy red-and-white awning with the hand crank dangling from the awning brace. Or unrolling it when the sun’s blazing. I hear the elevator thubbing to a stop at this floor, the cheap plastic telephone’s faint, infrequent ring. This is my favorite place in the house, or anywhere, whether I’m writing or not.

Señora Carlota Domínguez is at last in residence next door. I have been missing her, because that empty apartment spooks me a little when I get off the elevator at night. Sometimes the hall light is off because I forget nobody’s next door to switch it on after dark. Alberto was over there for three days, relinquishing his own flat after I arrived, but then he went back to Bogotá.

Señora Carlota Domínguez is a tiny avid vamp of sixty-eight who looks like an Andalusian grandmother, which she is, as well as being Alberto’s maternal aunt. She has an ardent lover a third her age who comes in from Matanzas to see her, and two others repining for her in other countries. When I saw the Cuban lover on her terrace back in January, I couldn’t look at him and breathe at the same time. This proves there should always be hope.

Carlota arrived last night on the Madrid flight, gleeful, cackling at her own fun while the taxi driver unloaded her luggage on the sidewalk. I was on my terrace, smoking and drinking rum colas in the dark with Brayon Lázaro Silva from Artemisa province. Brayon Lázaro Silva sent me a note via cocktail waitress at the Las Vegas Club a week ago. The message was so funny and blunt I had to spend the night with him. We got very drunk first. We got very drunk again last night. Señora Carlota Domínguez was in such an effervescent mood that she came over and got drunk with us.

Carlota is peering over the edge of her terrace as I write this, smiling at passing birds, the trees, the clouds. She casts a pointed glance down at voices rising from the entrada, shaking her dyed onyx curls. She waves at me and cocks an ear at a burst of laughter below. Often we communicate by making faces. Her expression says that the workers swarming in and out are predictably taking their sweet time with the repairs, it’s obvious at a glance, but it’s not unpleasant having them around, it makes a change, so why be bothered? We both remember the elevator going out for a month after the rains last spring. Neither of us enjoys climbing the back stairs. The lights in the stairwell short out all the time, and for her it’s a real physical ordeal. The dilatory cosmetic work under way is comparatively painless.

If I am not mistaken, two housepainters are currently planted on the stoop and plan on dawdling there until the rest of their crew arrives. Which could be any time between now and next Tuesday. It’s a state job. They’re paid whether they show up for it or not. The painters claim to be making their methodical way up here, a floor at a time, though in reality they work on any floor where they can loiter, where the tenants are gone for the day. It’s wise to keep an eye on them when they’re in your apartment. Nobody cares if they slack off, but they might pilfer something if given the opportunity.

They’re repainting terrace ceilings and other surfaces damaged in last month’s four-week deluge. They’re also giving the stairwell, terra incognita since the elevator got repaired, a fresh coat, and have turned that into a festive picnic grounds. One of the painters has his eye on me. A few days ago he tapped at the back door and asked Neyda for a cup of coffee. I focused on his fuzzy form across the salon once he stepped inside, furtively checking him out while he stood in the kitchen drinking it. Down here, fascination with male beauty impedes my progress. I continually remind myself it’s irrelevant to what I’m trying to do.

When attractive men show up at the door on their own initiative, though, what remains of spontaneous desire turns me into the prone cataleptic in I Walked with a Zombie. There’s no disputing it’s a role I was born to play. Ricardo, my ostensible husband, often tells me that I am a complete whore, but as it makes me happy to sleep around he doesn’t mind at all.

While the painter sipped his coffee, slouched against the utility closet, shirtless, paint-speckled, looking remote, I sensed he was taking his sweet time with his coffee break too. Unexpectedly, he shot me a swift, scorchingly direct look. It was like noticing a sniper on a distant rooftop a second late. Then he averted his face and handed Neyda the empty mug, wiped his hands on his spattered jeans, and left.

Now he nods and half-smirks for a second when I pass him in the building, as if we share a secret. It’s hardly a secret, since his co-workers all catch these utterly casual signals and totally get what they signify, and couldn’t care less about it. He’s handsome, no question. Full crown of black ringlets, moistly ponderous, anthracitic eyes, lips from the African heart of Baracoa, is my best guess. He never wears a shirt, so I see how well he’s put together on a daily basis.

It was no surprise to me that this man knew he was going to fuck me the instant we made eye contact. I knew it, he knew it, go know. Despite the languid pace of everything else here, nobody wastes any time or breath in establishing this kind of silent understanding. It’s effortless. He’s not in any hurry about it. I’m not, either. At the rate they’re going he’ll be around at least another month. 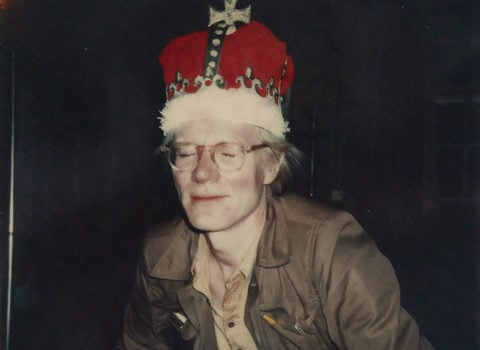 How not to write about Andy Warhol