Maurice Sendak once said that the subject of all his work was the “extraordinary heroism of children in the face of . . . a mostly indifferent adult world.” Nowhere is this theme more lavishly treated than in Outside Over There (1981), the third — after Where the Wild Things Are (1963) and In the Night Kitchen (1970) — in a trilogy of fantasy quests. Like naughty Max and hungry Mickey, the hero of Outside Over There is a furious and resolute child. Her name is Ida, and she’s been left in charge of baby sister while Mama sits in the arbor, distracted by a lifetime, or perhaps only a moment, of melancholy; Papa is “away at sea.” When Ida turns to noodle on her wonder-horn, a thin brass curl whose bell points backward, a crew of hooded goblins tumbles through the window. They abscond with the baby and leave behind a changeling made of ice. Ida’s rescue mission is a success — the goblins are unmasked as babies themselves, and dissolve into a stream as she blows a shimmying melody. The girls return home to find that Papa has sent a letter:

I’ll be home one day,
and my brave, bright little Ida
must watch the baby and her Mama
for her Papa, who loves her always. 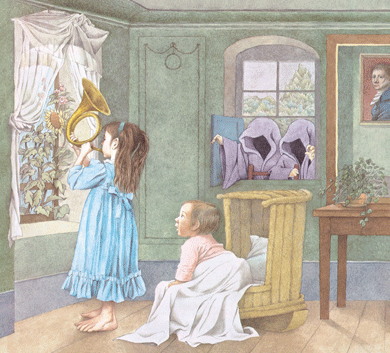 A panel from Outside Over There

Max and Mickey’s labors are rewarded with a warm bed, but young Ida’s meed is more work. Outside Over There offers heavy consolations: acknowledging resentment and disappointment, accepting responsibility, caring for others. The illustrations, a dusty hurricane of paintings recalling Caspar David Friedrich and Philipp Otto Runge, are lambent and hallucinatory. Fabrics billow, perspectives shift, and the baby emerges from an eggshell. In a lonely subterranean grotto sits Charles Lindbergh Jr. At one point, the sisters glide by Sendak’s idol Mozart holed up in a cottage, playing the fortepiano.

Outside Over There bewitched Jonathan Cott, a culture journalist who profiled Sendak for Rolling Stone in the 1970s and collaborated with him on a book about Victorian children’s literature. In THERE’S A MYSTERY THERE: THE PRIMAL VISION OF MAURICE SENDAK (Doubleday, $30), Cott parses Ida’s journey with the help of four equally obsessed “companion guides”: Richard M. Gottlieb, a Freudian analyst; Margaret Klenck, a Jungian analyst; Jane Doonan, an art historian; and the playwright Tony Kushner, who was a friend of Sendak’s. Each dialogue, written up at length, is given a chapter; Cott’s interviews with Sendak are also included. The conversations would have read more briskly as transcripts, and one grows a bit weary of Cott, who is ever the prepared and eager student. But the book is an inventive, intelligent pleasure, a collaborative close reading that is serious and loving. I wish there were more criticism like it.

A panel from Where the Wild Things Are. All artwork © Maurice Sendak. Courtesy HarperCollins

The analysts talk Winnicott and dreams, the art historian invokes Leonardo, and Kushner admires Sendak’s “deliberate so-called errors of syntax, the way language flows over its own mistakes, and flows because of its mistakes”: he calls it “immigrant speech.”

The ice thing only dripped and stared,
And Ida mad knew goblins had been there.

Sendak, who spent years in analysis and enjoyed the game of interpreting his art, would have appreciated Cott’s choice of interlocutors. Still, his most penetrating critics have always been children, who respond to his books with their bodies as well as their minds. Where the Wild Things Are has inspired their most fervent admiration. Cott relates the story of a severely autistic boy who, on careful examination of the three spreads depicting Max’s island rumpus, uttered his first words. Another boy sent Sendak a drawing of a wild thing, to which Sendak reciprocated with a drawing of his own. “Then I got a letter back from his mother, and she said: ‘Jim loved your card so much he ate it.’ ”

Ingestion and expulsion is our most primitive drama, and Sendak rendered it with a surreal and comic literalism. One strip, collected in Fantasy Sketches (1970), begins with a wailing baby swallowing a stork and ends with him eating his mother. Of course grown-ups are disturbed by such appalling tantrums, which are routine in Sendak; some have also been disturbed by how his characters look. As a young artist, he had a hard time getting published — editors found them too ugly. “They’re all a kind of caricature of me,” he said later. “They look as if they’d been hit on the head.” The bodies are short and squat, resembling his Eastern European family. (He attributed the grotesque attributes of the wild things to the moles and teeth and nose hairs of his aunts and uncles, who were “the real monsters of my childhood.”) Max and Mickey have simple cartoonish faces with dark slashing eyebrows and mouths that flatten and gape. They are the merry ancestors of the baby goblins — fat dumplings with broad noses and wrinkled brows. But Ida and her sister have large, pale eyes, eyebrows that arc like half-moons, and blushing cheeks. They are rosy-lipped and haunted, their skin lit from within, as if by grace.

Humans — specifically infants — would rather look at faces than at anything else. The faces don’t have to be lifelike: a circle enclosing three dots and a curved line will hold our attention. And we can’t help but interpret what we see. Faces strike us as trustworthy or threatening, competent or dominant. They do this very quickly. As Alexander Todorov notes in FACE VALUE: THE IRRESISTIBLE INFLUENCE OF FIRST IMPRESSIONS (Princeton University Press, $32.95), it takes between thirty and forty milliseconds to judge a face. Such valuations are not reasoned or willed; they are closer to perception than to thought. Our powerlessness to prevent them, Todorov, a professor of psychology at Princeton, writes, is why we grant them credence — although there is abundant evidence that we shouldn’t. Physiognomic inquiry dates to Aristotle, who believed that humans possess the traits of the animals they most resemble. It found its most influential skeptic in Georg Christoph Lichtenberg, an eighteenth-century German professor who rejected it as an “unfathomable leap from the surface of the body to the recesses of the soul.” Todorov also cites Rodolphe Töpffer, a nineteenth-century Swiss cartoonist, who showed how subtle alterations in facial features could change a “stupid stammering fellow” into one with a “certain capacity for concentration.” But for those positivists who refuse all knowledge that doesn’t come in double-blind form, the data is in: looks can be deceiving. You can give yourself an angry face by being angry a lot — it will freeze like that, as Grandmother said — but not because you were born that way. We refer to moods as character and mistake circumstances for disposition. If our expectations are confirmed, it is because they have generative power. Treat a person like a bomb and he is bound to go off. Todorov debunks recent studies finding that a person’s sexuality can be determined from a photograph and that aggressive-looking men act more aggressively than others. That we make judgments on the basis of first impressions, he tells us with touching patience, does not mean that these judgments are correct. What is interesting is that anyone would suggest otherwise. Physiognomy, Todorov writes, is an attempt “to deal with strangers in situations plagued with uncertainty.” It prospered in the nineteenth century, when cities were swollen with strangers suddenly living in proximity. Todorov doesn’t say this, but its recrudescence seems likely to be a reaction to newer influxes — immigrants and refugees, the digital onslaught of avatars and profile pics. We may be interested in just about any set of eyes, nose, and mouth, but we are not equally adept at differentiating them. Although, babies are born with the capacity to distinguish faces regardless of skin color, within months they become finely attuned to those of the race they see most frequently. Through repeated exposure, however, we can again learn to tell the faces of other races apart.

That skill will one day come in handy, if the authors of ALIENS: THE WORLD’S LEADING SCIENTISTS ON THE SEARCH FOR EXTRATERRESTRIAL LIFE (Picador, $25) are to be trusted. Inspired by Enrico Fermi’s famous question — “Where is everybody?” — theoretical physicist Jim Al-Khalili assembled a gang of cosmologists, biochemists, geneticists, psychologists, and rocket scientists to quarrel over quantum physics, eukaryogenesis, and the proton-motive force. For the humanists, there are essays on science fiction movies and case histories of close encounters. Not everyone is ready to dust off the welcome mat. Zoologist and party crasher Matthew Cobb, whose specialty is the sense of smell in maggots, takes the gloomiest view. Homo sapiens is not special or inevitable, he writes; we’re freaks, the product of calls so close that only a reckless gambler would bet on another species surviving them. Even if the aliens are out there, a meet-cute is unlikely. Timing is everything:

In the end we will go extinct, as all species do. The temporal window within which other civilisations could identify and contact us is likely to be extremely narrow; on a galactic timescale we will not be around for long. The same could apply to any hypothetical aliens. Tragically, we might simply miss each other.

In a charming and quietly Heideggerian essay on the octopus, Anil Seth, a neuroscientist, dilates on alien consciousness. “We perceive the world in terms of how we might act in and on it,” he says. There is no predicting how aliens will think, then, because we do not know what bodies they will have or what they will need from their environment. Lewis Dartnell, an astrobiologist, reassures the anxious reader that aliens are unlikely to come as oppressors or overlords. If they wanted slave labor, they’d build robots; there’s more water on Europa, one of Jupiter’s moons, and asteroids can be mined for iron, tungsten, and gold. He suspects that “if aliens did come to Earth it would be as researchers: biologists, anthropologists, linguists.” Chris McKay, a NASA scientist, hopes we can balance our desire to collect data with “ethical considerations” about protecting extraterrestrial microorganisms. “The more we look, the more we find out about ourselves,” concludes geneticist and broadcaster Adam Rutherford. We may soon have more opportunity for self-exploration. In February, NASA researchers announced the discovery of seven exoplanets orbiting the dwarf star Trappist-1. Will there be time to prepare a face to meet the extraterrestrial faces? They might be microbes, multicellular beings, or, as Seth Shostak, an astronomer, cautions, alien A.I. But they will never be parole officers. “Let us not lose focus on that most precious place we call home,” pleads the chemist Andrea Sella. Cobb ticks off a few tasks at hand: beating back the “existential threats” of climate change, nuclear annihilation, zoonotic epidemics, and the overprescription of antibiotics. “Home is where no one can ever be honest with you,” as Maurice Sendak put it, “but in fact there is no other place to go to.”