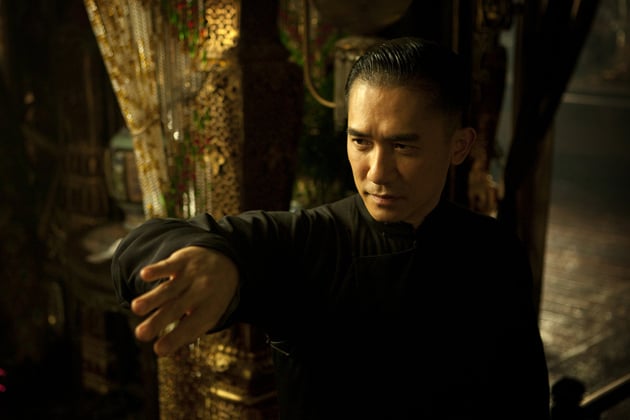 Tony Leung in The Grandmaster © The Weinstein Company

Wong Kar-wai’s The Grandmaster was released last Friday. Each of Wong’s previous masterpieces has evoked a kind of romantic longing. Chungking Express, for example, opens with a woman in a blond wig and a trench coat walking through the stalls of Chungking Mansions in Hong Kong. It’s a place where you can buy electronics and food, and it is crowded at night. The woman takes an elevator up to what looks like it might be a tailor shop, though it’s too dark to tell. We follow her down a hallway, and abruptly she turns and looks directly into the camera, the way a beautiful woman would turn to look at a man who was following her too closely. She walks a bit further, into a room with a man in an undershirt sitting on a top bunk, and the title screen comes up.

Then, over scenes of white clouds against the blue sky, behind silhouettes of industrial equipment, a young man says in voiceover, “Every day we brush past so many people. People we may never meet or people who may become close friends. I’m a cop, number 223. My name’s He Qiwu.” Now he is chasing someone through Chungking. He brushes past a mannequin wearing a blond wig like the woman’s. We see who he is chasing: a man whose hands are cuffed behind his back, and whose head is inside a paper bag with eyeholes cut out. Qiwu nearly slams into the woman with the blond wig, who reels to stay out of his way. In voiceover, he says, “That was the closest we ever got. Just 0.01 of a centimeter between us. But 57 hours later, I fell in love with this woman.”

In what is widely regarded as Wong’s masterpiece, In the Mood for Love, two neighbors — Chow Mo-wan and Su Li-zhen (also known as Mrs. Chan) — are being betrayed by their spouses: Chow’s wife is having an affair with Su’s husband. Chow and Su are often in their apartments alone, and a romance develops between them. But they can’t consummate the affair. One night Su is in Chow’s apartment, working on a kung-fu comic they’re creating, when her landlady comes home and starts a game of mah-jongg with her friends. Su doesn’t want to be seen returning from Chow’s place, so she waits for the game to end. She sits on the bed; he sits on a chair. The game goes on. She lies on the bed; he sits in a chair. The game of mah-jongg gets louder. They fall asleep. Su sleeps on Chow’s bed, and he sleeps in the chair. She stays the night. In the morning, she borrows a pair of high heels belonging to Chow’s wife and returns to her room.

The Grandmaster is a romantic portrayal of the object of Wong’s own rapture, kung fu. The film is a collection of stories about the central character, Ip Man (played by the sublime Tony Leung), and the masters of pre-1937 China. Wong has a light touch: he chooses his favorite historical episodes, and does not, as an academic might, insist that we understand the entire tradition of kung fu. He just wants us to glimpse his love. It is a bit like looking at an ocean: you can appreciate its beauty without knowing its depths.

Early in the film, Ip Man is chosen to represent southern China against the grandmaster of the north, Gong Yutian. They meet before members of Gong’s inner circle, and Gong holds out a cake. He asks Ip Man to break it. A brief, balletic sparring match ensues, and Ip Man manages to get his fingers on the cake. The two men hold it, and a moment passes. Ip Man lets go. Gong waits, the cake still in one piece, held out — and then half of it tumbles to the ground.

The battle takes place just before the Japanese invasion of China, a moment when it is important for the south and the north to unify. Gong is not seeking to become master of China. He is seeking an ally. But he can’t give his true aim away; a worthy ally would understand it. And so he offers this peculiar, disorienting challenge, with no apparent possibility of victory. To decline to break the cake — which signifies the unity of China — would be to lose the fight. To break the cake — to win the fight — would signify disunity. Ip Man understands this. He manages, with some maneuvering, to get his hand onto the cake and holds it — unity — then lets go. The cake breaks not because he has broken it, but because of the tremendous energy passing between the two masters’ hands.

Later in the movie, after Ip Man has left China following the Japanese invasion, he sits in a café in Hong Kong. He has lost his wife and their two children to famine. In a voiceover, he explains that it can be dangerous to accept a cigarette from a stranger. He does not say why — only that, if a cigarette is offered to him, he must accept it. Not doing so would cause the person who had offered it to lose face.

A tai-chi master named Ding Lianshan sits down and offers Ip Man a cigarette. Ip Man hesitates, then accepts. Ding offers to light the cigarette for Ip Man, who accepts this as well. He takes a puff, and Ding tells him it is too bad they did not meet twenty years earlier, when Ding was still young. He says, “You’ve got the gift.” We understand that by watching Ip Man for a few moments, Ding has recognized a fellow master. They do not fight. They do not need to; that is the end of their confrontation.

Each battle in the film is new, precise, and intelligent. Many are difficult to understand, but they are like riddles, and can be puzzled out. The Grandmaster’s fight scenes aren’t the brute battles of fists and wills you might expect of a kung-fu movie, just as Wong’s romances aren’t about sex. In both his portrayals of love and his portrayals of fighting, he is drawn to spiritual elements: the love of a woman a man will never physically know; the contest that takes place in the lighting of a cigarette. The kinds of encounters that seem imaginary to the materialists of the world, but are everything — the place where it all happens — to the rest of us.