“All of these practices are flagrant violations of the law.” In March, I traveled to Louisiana to report on the  “legacy lawsuits” being launched by landowners against the state’s energy corporations, which have been drilling there since 1901. For decades, companies like BP, ExxonMobil, and Shell leased sites from the landowners for extraction and processing. This went on until the 1980s, when the companies began selling off their interests to independent producers and moved their operations largely offshore. They left behind land contaminated with oil, petrochemicals, and other toxic substances.

One of the most frequently cited environmental hazards in the suits is a byproduct of the drilling process that the oil companies benevolently label “brine” (or “produced water”). This waste fluid is highly saturated with salt, and where it is improperly stored, it endangers groundwater and vegetation. Brine has been found to contain traces of benzene, chromium, lead, and other potential carcinogens, as well as radioactive materials. American oil companies once stored brine in unsealed open pits, despite their awareness that the practice was unsafe. In 1932, V. L. Martin of the American Petroleum Institute told his colleagues that brine would undoubtedly seep from the pits and cause significant environmental damage. It was, Martin said, “only a question of time until the opposition to the escape of our waste will become strong enough to force us, as an economical measure, to dispose of them in such a manner as will not be objectionable.”

Around that time, industry developed a method of injecting waste in saltwater disposal wells, a safer practice than pit disposal, and one that soon became the primary method. Some states banned unlined pits, but in Louisiana companies continued to store brine in them until the 1980s (and even then, state regulators, who were often oilmen themselves, allowed a three-year grace period for shutting down the pits).

Louisiana landowners began winning big payouts from oil corporations in 2003, when the state Supreme Court upheld a $33 million jury judgment against Shell in a case brought by a man named William Corbello. Hundreds of others have filed suit since then, prompting energy companies to launch a massive and generally successful lobbying campaign aimed at getting Louisiana’s perennially pro-oil legislature to restrict the suits. The plaintiffs’ trial lawyers have won access through the discovery process to a historic trove of internal oil-company memos, which, as I detail in “Dirty South,” (Harper’s, November), show that the companies long understood the environmental dangers of unlined pits but continued to use them — sometimes in defiance of state and federal regulations — because doing so was more profitable than phasing out the pits.

Below are brief summaries and excerpts from some of the documents:

This memo detailed problems at some of the company’s Louisiana sites and acknowledged that some Shell waste pits were “either out of compliance with state regulations or deteriorating in a manner that threatens environmental damage.”

“Industry waste handling has become careless,” the author added, “as any and all types of wastes are dumped into these pits. Some of these pits have become ‘eyesores’ because there is no economic incentive to maintain them.”

Unfortunately, the EPA was considering new regulations on oil-waste disposal that the American Petroleum Institute had estimated would cost industry $34.7 billion nationally.  “Negatively speaking, the future use of pits in Coastal Division looks economically undesirable when assessing proposed regulations. . . . Positively speaking, these regulations could be mitigated through congressional action to reduce their economic impact.”

Translation: We can get our friends in Washington to gut or kill the new regulations. Which was precisely what happened.

This memo discussed a recent environmental survey at four Shell facilities. The investigation had found that three of the four were violating “numerous” federal and state air-quality, waste-disposal, and water-pollution regulations:

[P]it dikes are seeping fluids to navigable waters; dikes have deteriorated allowing fluids to escape during rains and upset conditions; pits are full and needed to be emptied; vegetation kill is evident around facility pit areas due to oil and saltwater leaks; oil is standing on facility locations and in surrounding wetland areas without being cleaned up; illegal discharges of saltwater and waste oils are being made to navigable waters; and facility housekeeping and upkeep is poor.

There were “three main reasons” for the situation:

First, the antiquated production and pit systems used at these fields were not designed to protect the environment. . . . Secondly, the facility upkeep problem has been compounded because the state enforcement agencies have been slack in enforcing their regulations. This slackness may have been considered beneficial by management when cost was evaluated in the past, but it has created a mood of operational indifference that has in most instances resulted in poor upkeep of facilities. . . . Lastly, discussions with field personnel indicate they are not fully aware of pollution prevention regulations. This was especially obvious at the LaPice field facility. Dikes were purposely cut to drain oil and saltwater from the SWD storage area. The saltwater pit continuously discharges waste fluids into navigable waters. Waste lubrication oil from the compressors is drained into the wetlands. All of these practices are flagrant violations of the law.” 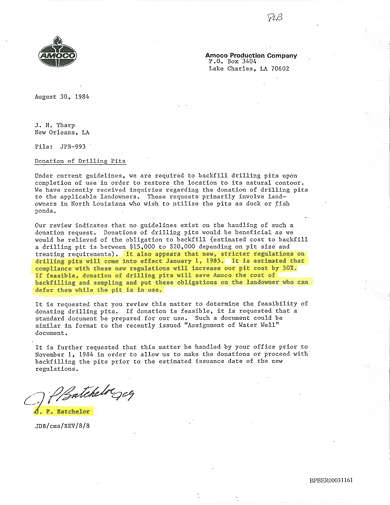 This memo, written by J. P. Batchelor, noted that state environmental regulations required companies to backfill out-of-service pits on landowners’ properties, “in order to restore the location to its natural contour.” Batchelor suggested that Amoco instead make “donations” of the pits to landowners for use as duck or fishponds. “Donations of drilling pits would be beneficial as we would be relieved of the obligation to backfill (estimated cost to backfill a drilling pit is between $15,000 to $20,0000 depending on pit size and treating requirements).”

Four years after writing this memo, Batchelor was appointed head of the state Office of Conservation, which has responsibility for regulating oil and gas companies. In 1989, he was quoted in a New Orleans Times-Picayune story which noted that oil companies were not required to submit evidence to the state showing they’d actually treated or disposed of toxic waste when closing unlined pits, and that the state wasn’t doing anything to independently confirm that such remediation had taken place. “You know,” Batchelor said, “the state police aren’t catching everyone that’s speeding. They’ve got to depend on people to be honest and abide by the law, and that’s what we do.”

This memo contained both good and bad news for Unocal. The bad news was that the company believed that more than 300 of its facilities “have soil and/or groundwater contamination problems of varying severity. . . .  Litigation can be expected in most cases where drinking water aquifers have become contaminated.” The good news was that, “Our environmental legislative and regulatory group, under Pat O’Toole, has been effective in tempering state bills and proposed regulations which would have increased clean-up and disposal costs. Identified savings exceed some $20 million. This work continues, and future savings are anticipated.”

This memo noted that ARCO had misleadingly told the state that its current pit disposal practices were “adequate” to protect the environment. The truth: “This position is actually our formal position to the public rather than the consensus of environmental professionals within ARCO. There are some real concerns within ARCO that pit disposal practices may be inadequate to protect the environment and could pose future liabilities for the company.”

This memo recounted that six years earlier, Texaco had discovered significant groundwater contamination at one of the company’s Louisiana sites, and had hired Woodward-Clyde Consultants to help address the situation. Despite their efforts, state regulators subsequently found that soil samples at the site were “highly contaminated with chlorides.” In considering possible remedies, the memo’s author wrote

Woodward-Clyde feels that presently we are just mitigating the problem. With the method of remediation being used we are looking at over 125 years clean up time. The fastest remediation process would be to remove the soil and eliminate the source. However, this is the most expensive procedure with an estimated cost between 5 and 10 million dollars. Other remediation techniques could be used to speed up the dilution process but this would depend on how much money we are willing to spend. Presently we are using the cheapest method of remediation.