Wet Verse at The New Yorker

From “Water Images of The New Yorker,” by Charles Bernstein. Bernstein’s study was distributed to participants at a poetry seminar held in June at the Kootenay School of Writing in Vancouver.

Maybe you’ve heard it before: “Did you ever notice that every poem in The New Yorker has a water image? Whadda they do, print only wet poems?”

While slightly less interesting than looking for the hidden “Ninas” in Al Hirschfeld’s cartoons in the New York Times, this water-on-the-brain syndrome exerts a certain fascination.

So, when The New Yorker‘s poetry editor, Howard Moss, died last year, I wondered if the policy would continue under a poetry editor whose name was not, like Moss, a water image. Since many of us love to complain about the trivializing of poetry by “official verse culture”–a highfalutin name for mainstream poetry editing–I thought, Why not try some hard-nosed empirical research for a change? Why not try to give some social scientific status to these potshots?

With “only the facts” as my motto, I read through all of The New Yorker‘s poetry selections, except for a couple of translations, from January 30 to May 15, 1989–a total of sixteen issues. In all but three of these issues, 100 percent of the poems published included at least one water image. Two of the almost waterless issues (March 13 and March 20) were published back-to-back. In the third (February 27), two of the poems referred to water while the third almost did, mentioning “clouds.” My theory is that during these dry spells the magazine’s Water Image Control Officer may have been less than vigilant due to a drinking problem. Overall, 86 percent of the poems published during these four months had water images; that’s thirty-two of the thirty-seven poems from this period.

In the January 30 issue, J. D. McClatchy mentions “cat spray” on line 3, but it’s not until line 19 that we get “hose to wash/Dung out of the cow guts.” A few pages later, Elizabeth Macklin’s “Surface Tension” starts with “a long, cool bath” in “blue water” and “flood[s]” on from there.

The next week, William Logan has a “grassy lake” in line 1, a “freshwater pond” in line 2, a “lone canoeist” in line 3, and “water like broken rakes” in line 4. He sums up his poetic sensibility several lines after, referring to “shallows of the continental shelf.” A few pages later, Mary Kinzie has some arid stanzas before her dam breaks with “Will water/in the desert also stagger”; several lines before the end there’s also the heartfelt precipitation of “weep.” The third poem in the February 6 issue, by Eleanor Ross Taylor, tells us “it rained all day” and ends with drinking “a glass of water.”

At the risk of water-logging my tale, I’ll condense the chronicle a bit from here on.

February 27: “ice-white neon,” “spit up, frothing,/coming to boil,” “sob”–yet a “soft dry shout”! (Jorie Graham); and another “flood” (Josephine Jacobsen). Somehow the combination of “the weather was nice,” “a blueness run everywhere,” “source of desiring,” “wellheads,” and, incredibly, “turtledoves” led me to count George Bradley’s marginal call in March 6.

Mark Strand, in the same issue, is more forthcoming with “On the shores of the darkest known river” in line 2, followed by “steaming,” “muck,” “drift upstream,/Against the water’s will,” “weep,” and “frost.” Macklin in March 13 shares with us “wet gray,” “marsh bird,” “waves,” and “cool as water,” while Joseph Brodsky has the obligatory “tear,” and soon after, “moon skims the water” (March 27). Some cartoons on, we splash over Revan Schendler’s “bay tide” and “broad shore.”

In the April 3 issue, Robert Mazzocco writes of “the Hudson” and “taking a leak” and “I’ll water it when I remember it,” and Strand has “lake,” “rushing sound,” “storms,” and “water’s edge”; while in April 10 Linda Bierds muses about “rippling lines,” “lake bass,” and “sudden rain.”

Seamus Heaney has a particularly appropriate title in April 17–“Crossings.” This modern master goes on to note that “Running water never disappointed” and waxes about “the wetness of the bog,” “old drains and old streams,” before reaching The New Yorker epiphany par excellence: “the absolute river/Between us and it all.” Not to be outdone, Charles Wright, in the same issue, writes of stars “east of the river” and of being “Washed in the colors of paradise,” “water-colored”; while Philip Levine manages only “snow had all but melted.”

After Raymond Carver’s terse “rain” and “damp” and Clampitt’s “overseas” and “warm snowdrift,” we get John Ashbery’s “like a fish on a line,” “under the waterfall,” and his stabbing sense of where he’s publishing–“A kind of powdered suburban poetry fits/the description,” “to read little signs/in the moss” (April 24). Moss indeed!

The final issue surveyed features Deborah Digges’s gush of “fish,” “sea,” “dewy” “harbor” “across the bay,” “waving from the shore,” and “washed his face” too. Mazzocco has it down in “Loneliness in the City” (also May 15) with “waves of flickering shop windows” and “aquarium of little fish.” Surely poetry can do better–it’s hard not to–once it stops hugging the shore at The New Yorker.

Dedicated to poet Jerome Rothenberg on the occasion of his eightieth birthday last year. Bernstein’s Recalculating will be published this spring by The University of Chicago Press. The town is… 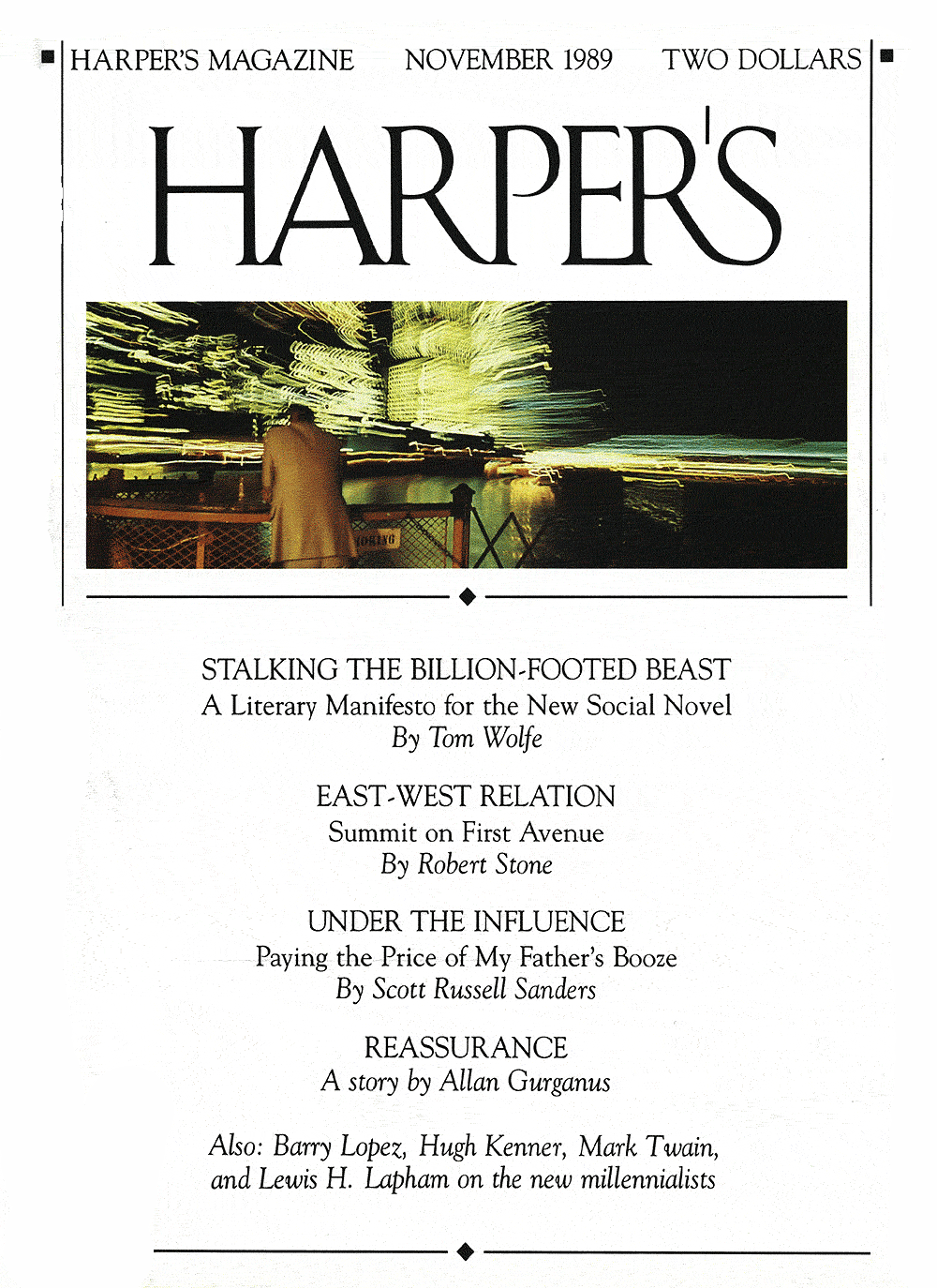 From the
November 1989 issue