The House that Karl Built | Harper's Magazine
[No Comment]

The House that Karl Built

The Architectural Digest special issue on the homes of Karl Rove may still be a few years off. There will of course be plenty to cover. His home in the Texas Hill Country, which Rove still insists is his primary residence for voting purposes, and where Rove served his steadfast friend David Broder quail one fall evening. His house at 4925 Weaver Terrace, N.W.
in Washington, D.C. (assessed value, $1.6 million) which has been his actual primary residence for the last seven years. But then there is Karl’s resort home, located in Lower Alabama (the thin strip of Florida across the bay from Mobile), which just got its first media coverage.

Raw Story’s Lindsay Beyerstein and Larisa Alexandrovna recently made their way out to Rosemary Beach to check out the Rove vacation retreat, and posted a piece describing it.

Rosemary Beach, Florida bills itself as a vacation community, but Rove’s home is no beach bungalow. His Dill Lane pad is a 2,578-square-foot cedar and white stucco structure with a stoop, 4 bedrooms, 3 baths, and an outdoor shower. Opposite the main house, separated by a small walled courtyard, is a two-story carriage house with a two-car garage on the ground floor.

The setting is equally upscale. Rosemary Beach is a 107-acre development along a stretch of County Road 30A, between Destin and Panama City, Florida. The centrally planned community bills itself as a town. In fact it’s an exclusive real estate development in an unincorporated part of Walton County–although the developers have erected a “Town Hall.” All homes and businesses in Rosemary Beach are designed and laid out according to a master Town Plan. Marketing materials describe the architecture as “Pan-Caribbean.”

The development is close to Seaside, an architecturally innovative town with similar architectural vernacular that was featured in the movie “Truman.” Rove has spent large amounts of time in the area starting from 2002. He is active advising campaigns in the area, and particularly in Alabama.

Rove has deep roots in Alabama. In 1994 the Business Council of Alabama hired Rove as a consultant for a judicial campaign. Rove worked alongside Republican activist/lobbyist Bill Canary, now the CEO of the Business Counsel of Alabama, to help deliver Alabama’s Supreme Court to the Republicans. In 1998 Rove advised William Pryor in his successful bid for Alabama Attorney General. It was Pryor who would go on to certify the ballots for Baldwin County that would give Bob Riley the margin of victory in his bid to unseat Democratic Governor Don Siegelman.

Siegelman, who was jailed for bribery after a widely criticized political prosecution, was granted bond Thursday and is supposed to be released today.

Rove’s political ties to Alabama didn’t end when he joined George W. Bush’s administration as Deputy Chief of Staff. Rove continued to advise Alabama politicians, including Gov. Bob Riley, according to a Republican activist who recounted Rove’s four-year covert involvement in a campaign to neutralize Siegelman to Raw Story in November, 2007.

Rove’s client William Pryor, now a federal judge, and previously, as Alabama Attorney General, the man who initiated the criminal investigation upon which the Siegelman prosecution was developed. Rove’s close friend Bill Canary is the husband of Leura Canary, the U.S. Attorney who brought that prosecution. Canary nominally recused herself from it after ethics complaints were lodged. The matter was taken to trial by one of her staffers. Congress is preparing to subpoena Rove to get a sworn account of his dealings related to the Siegelman prosecution.

The Raw Story piece features a photo tour of the million-dollar Rove estate in Rosemary Beach. Here is some of the photospread reproduced courtesy of Lindsay Beyerstein and Larisa Alexandrovna: 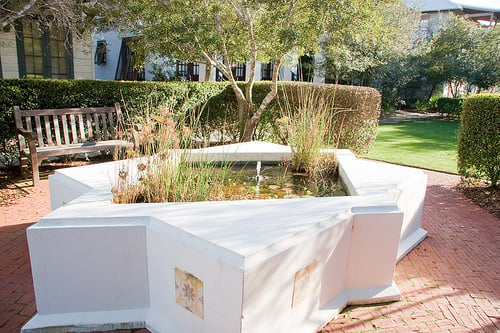 I asked Alexandrovna how they came by the pictures. Here’s her reply:

We got the photos on our way to Alabama. The city (Rosemary Beach) is not on any map and the house is nearly impossible to find. We had to ask locals how to get to Rosemary and once there, we found an obliging electrician working around the area to take us to Dill Street. We followed him. Dill Street is tiny, like an alley almost with few houses on it. Rove’s house is like a citadel (as you can see from the photos) with the carriage house directly off of Dill Street. The house proper is nearly impossible to see from the street and in order to get near it, one has to get onto Rove’s property itself. We did not want to trespass. So Lindsay and I decided to drive away, park, and go for a walk. We had to account for Lindsay’s very obvious camera.

We decided to present ourselves as sisters, who were house-hunting and wanted to take photos of the local architecture to get some ideas. We went to the house next door to Rove’s, introduced ourselves using our real names, but said we were these sisters who were house-hunting. We asked the neighbors for permission to take photos off of their property, but not of their property, which is why we have no photos of their residence. If we had taken photos of the neighbor’s residence, then we would have had to identify ourselves as reporters, which we were trying to avoid.

So, having obtained permission, we shot the pictures from the next door neighbor’s house, without having to trespass on Rove’s property. I talked to the neighbors and Lindsay took the photos of the fountain and front of the house proper.

As we were leaving, we noticed the sudden appearance of several golf cart type vehicles driving around Dill, parking around Dill, and one guy was on a walkie-talkie. We did not know if Rove still enjoyed secret service protection, but these guys did not look like your typical neighborhood security or repair types. Their hair was far too neatly groomed, they dressed in over-done “vacation-ware” and they wore dark, very dark tinted glasses.

As we were walking back to our car, we noticed one of these guys watching us and talking on his walkie-talkie. So I came up to him and asked him how I could get to the development’s sale office because I was interested in buying land. I may as well have said that I was from Mars, because his mouth literally fell open and he could not come up with directions. Now we don’t even know our way around, but even we knew where the sale’s office was. This guy working for the community could not come up with an answer? So is Rove getting secret service protection, paid for by the public? We could not get a straight answer out of anyone we contacted.

Anyway, that is how we got the pictures. By the way, the community is lovely and has a great little bookshop too. I wish we could have spent more time talking to the locals, but we had to get back on the road.

I will tell you this though, even in the short amount of time we spent there, it was obvious that Rove is not well liked in his own community. Now remember, this is a very Republican area and a very wealthy area. The entire place is filled with art galleries and antique shops. So in this very wealthy, Republican leaning community, no matter who we talked to, it was the same vehement anger. The most printable comment we got, was the one we published, the rest was so aggressive and filled with profanities, that we thought it best to leave those comments out. Suffice it to say, I have never seen anyone so unwelcome and unwanted in their own community.