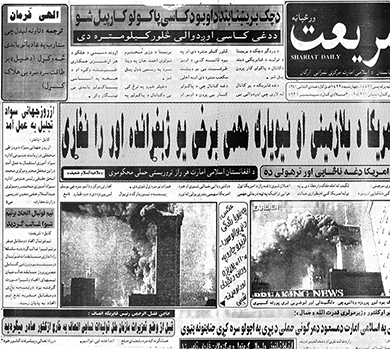 For the editors of Shariat Daily, the Afghan Taliban’s government paper (which actually came out only twice a week), September 12, 2001, was a busy day. Ahmad Shah Massoud, the commander of the Northern Alliance resistance, had been assassinated on September 9 by two North African suicide bombers masquerading as journalists. Then, of course, had come the attacks on Manhattan’s World Trade Center towers. If you relied on the black-and-white columns of Shariat for your news, this was the headline you found on the front page — beneath the story about dam-cleaning in Wardak province and next to the dispatch from a celebration of International Literacy Day:

No mention of the hijacked airliners appeared until page four.

As part of my research for “The Pious Spy,” published in the January issue of Harper’s, I went to the Afghanistan Centre at Kabul University (ACKU) and flipped through five years’ worth of the Shariat archive, hoping to learn more about press censorship in the Islamic Emirate of Afghanistan. There to assist me was Abdul Waheed Wafa, the director of the center. Wafa, who like me lived in Kabul under Mullah Omar’s regime, worked various jobs in the late 1990s, including as a de-miner, before beginning his career as a journalist weeks before the U.S. invasion. After ten years with the New York Times, Wafa ended up taking over the ACKU. Over tea and a lunch of rice with carrots and raisins, we traded stories and shared a smile of disbelief at the absurdities of Taliban censorship.

In the days before 9/11, the hot topic in Shariat was the arrest and trial of twenty-four NGO workers, including eight foreigners, accused of “showing films on Christianity and distributing religious cassettes to Afghans in an attempt to convert them from Islam” — a crime punishable by death. Other front-page items included:

21 Dish Antennas Captured in the Past Two Weeks in Kabul

For the First Time, Afghans Can Call Abroad from Digital Phones

Hamid Gul [a former Pakistani intelligence chief]: “Afghanistan is the Only Free Country in the World”

In Accordance with the Guidance of the Honorable Leader of the Faithful, Prayers for Rain Held Across the Country

As a teenager growing up in Kabul, I developed an obsession with Iranian detective novels, which could be rented from the bookshops in our neighborhood bazaar for the equivalent of five cents a night. The state ban on movies, music, and television meant there was little other entertainment. My favorite author was Parviz Ghazi Saeed, whose heroes all had authentic Western names like “Lawson.” (The idea of an agent named Ahmad or Ramin traveling to Hamburg to bust an international kidnapping ring would have seemed ridiculous.) When the bombing blackouts began in Kabul in late 2001, I would read these novels, sometimes an entire volume in a night, by the dim light of an oil lamp.

Years later, as I sat at the Afghanistan Centre reading through the Shariat archives, the deep irony of Taliban censorship became suddenly clear in the title of one exposé: “The Mystery Behind the Death of Master Bruce Lee.” In a country supposedly devoid of movies, a movie star could still make the papers.