Inside the December Issue

Andrew Cockburn on the New Red Scare, Kiera Feldman on the right to choose in Rapid City, Fred Bahnson on feral faith in the age of climate change, and more 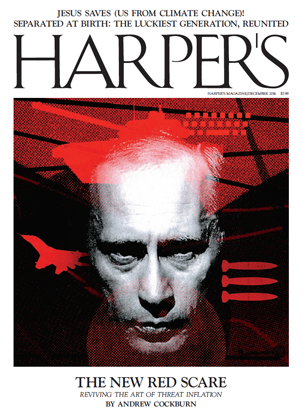 We have just emerged from one of the most bruising elections in American history, notable not only for its level of vituperation but for the sinister presence of a third party: the Russian government.  Or so goes the standard narrative, which Andrew Cockburn takes some pains to debunk in “The New Red Scare.” The author concedes that Putin’s intelligence agencies may well have engineered the D.N.C. hacks. The other operations—the leaking of the pilfered material, and the intrusions into election-related computer systems in Arizona and Illinois—are much harder to trace. What most alarms Cockburn, in any case, is our eagerness to latch onto Russia as the bogeyman of choice. This is an old habit, he argues, going straight back to America’s inflation of the Russian threat after the Second World War. It benefits the politicians (since it allows them to dodge more pressing issues) and the weapons industry (since it keeps the cash register ringing)—but it is a blight, says Cockburn, on the civilian populace of both nations. Are the Russians truly coming? Read the piece and decide for yourself.

The winner of that election was Donald Trump. And once he assumes office, he is likely to wreak havoc on any number of things, including reproductive rights. In “With Child,” Kiera Feldman travels to South Dakota, a state whose abhorrence of Roe v. Wade would gladden the heart of our next president. There she explores the numerous legal and logistical hurdles placed in the path of any woman seeking an abortion. If Trump manages to pack the Supreme Court with frothing pro-lifers, the future for women’s health will look something like this—or much, much worse.

Things look little better when it comes to climate change. But Fred Bahnson finds something of a silver lining in “The Priest in the Trees”—a chronicle of the Reverend Stephen Blackmer, a former environmental activist who found his vocation during a plane flight in 2007. (“You are to be a priest,” said a voice in his head, which he was admittedly slow to heed.) Blackmer attended divinity school, was ordained, and soon founded the Church of the Woods: an outdoor sanctuary on 106 acres in New Hampshire, whose congregants regard nature as a balm, a necessity, and a spiritual lodestar. Many comparisons comes to mind—are we encountering Thoreau in a clerical collar?—but none of them really explain Blackmer and his flock, who believe that prayer and contemplation are necessary if we hope to fix an ailing planet.

Back in 1987, Daniel Asa Rose struck up a conversation with a stranger in a bar, and discovered that both of them had been born on the same day in the same hospital. The encounter surprised and tickled him—and decades later, he decided to track down some additional birth mates, eventually locating four more. What had this random sample of humanity been up to since 1949, when they shared a Brooklyn nursery together for a week? And did it mean much to be members of a generational cohort, or nothing at all? Rose tackles these questions and more in “Separated At Birth,” a funny and fascinating peek into the ambivalent heart of boomer culture.

Elsewhere in the magazine, Simon Parkin spills the beans on carp-rustling in the United Kingdom, and Anne Applebaum offers a master class on the rise and fall of the Romanov dynasty. Cartoonist Catherine Meurisse looks back on the Charlie Hebdo massacre in “The Lightness,” finding both solace and a kind of phantom pain in works of classical sculpture. Dyannah Byington makes her debut in the magazine with “Cold Fish,” a svelte work of fiction about romantic failure, and Readings features excerpts from Javier Marías, Karl Ove Knausgaard, and Peter Handke, plus Elena Ferrante on fame (she doesn’t like it). And Easy Chair columnist Walter Kirn drives out to Standing Rock—a journey that spooks, shames, and enlightens him in equal measure.