1. A martini, like a country, is difficult to get right. Either can, in a matter of hours, elicit exquisite calm, wild anger, violence, agony, poorly constructed monologues, exhaustion. Some people are Democrats, others Republicans; some prefer gin and some vodka. In America’s 3.8 million square miles, martini-drinking citizens come to expect variety. Bernard De Voto, writing his Easy Chair column for this magazine in December 1951, reported, “I am afraid that the fine art of blending gin and vermouth gets small encouragement in my native West, and indeed the West (always excepting Denver, a center of aesthetics) is pragmatic rather than studious in its alcoholic culture.” The martini aficionado Roger Angell, a New Yorker, has advised, “Now, for vermouth, take a little less than you think you need, and then pour in a little less than that.” But the buzz was killed last week, when Olivia Nuzzi, a political reporter for the Daily Beast, tweeted a photo of a martini served at the Trump Grill, the steakhouse in the lobby of Trump Tower, in midtown Manhattan. The image was favorited twenty-eight thousand times, which is to say that it was greatly disliked. There, in Trump’s house, America had ordered itself a very bad martini.

2. The eye goes first to the glass. Only a day before this photo was taken, in a Vanity Fair article called “Trump Grill Could Be the Worst Restaurant in America,” a reviewer found the setting to be “a cheap version of rich.” Pouring a martini into a wine glass may seem fancy, but it makes less sense than pouring apple juice in there. According to Wine Spectator, “The sizes and shapes of the bowls”—meaning the cups, for us simpletons—“influence the intensity and complexity of the aromas, while the shapes of the rims determine where the wine initially lands on the tongue, affecting the perception of its taste.” Sniffing a martini is like sniffing a meatloaf, only less rewarding. As for taste, perception itself increasingly becomes a factor, as one floats blissfully into the evening, but any old table glass does the job. A martini glass serves “up,” to prevent your hands from warming the drink, but it doesn’t really matter much if you let it rest on the bar, sipping as one should: intermittently. The main thing to avoid would be Marilyn Monroe’s martini order from The Seven Year Itch: “I’ll have a glass of that. A big, tall one.”

3. The greatest offense is the ice. First, it is evidence of a production failure. How did this martini come into existence? Did an undercompensated, weary laborer pour gin, dry vermouth, a fistful of ice, and an olive into a glass and mix with a coffee stirrer? Did some combination of these ingredients get sloshed around in a shaker, as the ice broke down into chips and watery slush? Did a bartender cry, and this is what gushed out? The resulting martini reminds of the troubled American education system, which has failed on so many levels to teach students about the virtues of methodology, research, the principles of science. When Betsy DeVos, Trump’s nominee for education secretary, takes the helm, we must all remember that our future mixologists and tavern-keepers and home cocktail mixers hang in the balance; as a proponent of “school choice” and diverting public funds to religious-education vouchers and tax credits, her policies are not likely to properly prepare them. Beyond the greater misfortunes of the years ahead, we may also find a million James Bonds, drinking weak martinis beside girlfriends with unfortunate names.

4. The second problem with ice in a martini is the ice in the martini. Cocktail snobs know that in any drink that takes ice, a single big block is best, so as not to dilute the contents. For a martini, this never comes up, because ice never belongs, so the fact that what Nuzzi documented at the Trump Grill contained little ice cubes is really beside the point. The ideal way to get a martini cold is by thinking ahead—as Trump hates to do—and sticking a glass or two in the freezer before the ingredients are combined. When it’s time to mix—to stir, or gently swirl—ice should be the last kid in the pool and not stay in long. But it should be ample, like in the Arctic a hundred years ago, not a hundred years from now.

5. One last thing—the olive. De Voto again, in his most important martini column for Harper’s, in 1949: “I suppose, nothing can be done with people who put olives in martinis, presumably because in some desolate childhood hour someone refused them a dill pickle and so they go through life lusting for the taste of brine.” What is not pictured here, and what Nuzzi never mentions in her tweet, is the identity of the man next to her, the one who ordered this martini at the Trump Grill. This man crossed police barricades on 5th Avenue—some draped with an ad for Tiffany’s, Trump’s next-door neighbor, which decided to dress up the blockades with cloth cut in its signature blue—past security guards manning one tent outside the front door. This man brushed by executives and sycophants and tourists, and took a refuge at a bar, seeking something strong. The serious offense of this martini is how profoundly it failed to serve this man—this olive eater—who had come, in good faith, to Trump’s America. 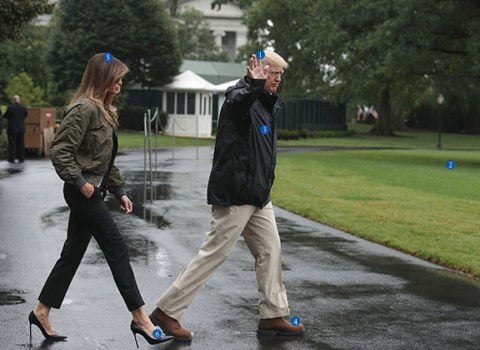