When we visited the city of Colón on Panama’s Caribbean coast in February, a woman named Argentina stood in front of a collapsing building, surrounded by plastic bags filled with her belongings. “I don’t want to go,” she said. “I don’t want to.” She was fifty-four years old, with golden hair and a tattoo of the word resiliencia on her arm. She had lived in the building since 2005, when she’d bought her apartment for two thousand dollars, moving with her husband and four children into this place not so different from their previous home a few blocks away: both had mildewed walls, rancid air, holes in the floor. The government was relocating them to a new apartment outside the city, one it assured them would be an improvement on these conditions. But Argentina, like her neighbors, had no interest in leaving her home. Argentina unpacking at her new apartment in Altos de Los Lagos. All photographs from Colón, Panama, by Rose Marie Cromwell for Harper’s Magazine © The artist

Colón is Panama’s third-largest city, and its early decades were marked by a sense of frantic, unsustainable growth. It was founded in 1850, at the peak of the California Gold Rush, the year the United States started construction on a railroad that would move cargo across Panama, between the Atlantic and the Pacific. Fifty years later, the United States began to dig the forty-eight-mile Panama Canal. Colón was one of the cities affected most profoundly, exploding from three thousand inhabitants in 1900 to more than thirty thousand in 1920, most of the new residents immigrants from the Antilles who had come to work on the canal. Where there had once been only huts, there were now luxury hotels and paved streets laid out in a Cartesian grid. It was the proudest, richest, and most distinguished city in the country.

The city’s fortunes fell precipitously over the latter half of the twentieth century. This was in part due to the treaties of 1977, which set a date to transfer control of the canal to Panama; the Americans soon began to abandon Colón, and the business community became concentrated in the capital, Panama City. Prejudice against Colón’s predominately black population has no doubt played a major role as well. Politicians have long threatened to expand the duty-free trade zone at the city’s ports, which would displace the city’s poor residents in order to reinvigorate the economy. A view from one of the tallest buildings in Colón, known as 15 Pisos, a residential building that does not have running water or a working elevator. 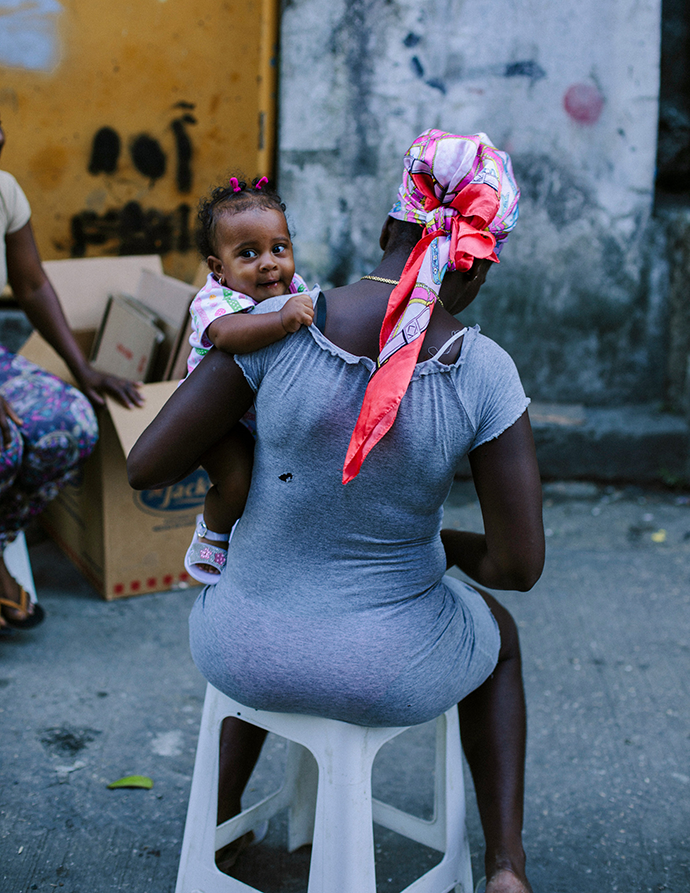 A friend of Argentina’s, Yeisy, and her baby rest while helping Argentina move outside her old apartment in Colón. Power lines illegally spliced into the electrical grid, the way by which most inhabitants access electricity. 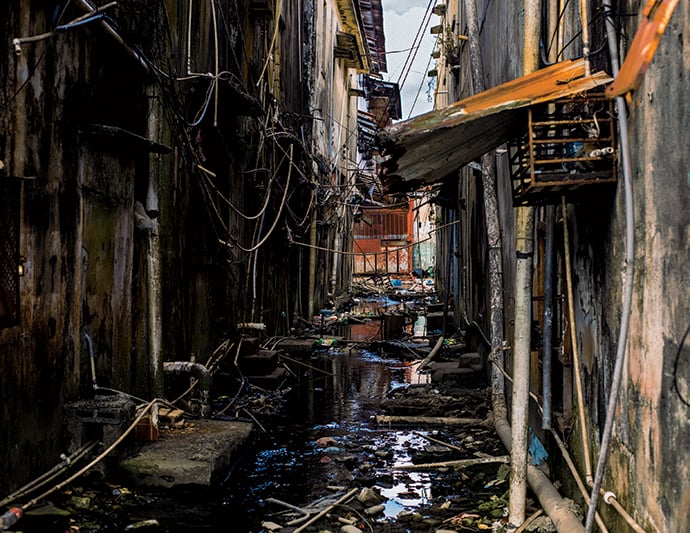 An alleyway flooded due to a broken public water spout. Water service is irregular in Colón, where residents bathe and gather water for cooking at public spigots. Children from La Playita play near the port of Cristóbal, a major stop for international
shipping. The urban renewal of Colón was a central plank in the campaign platform of Juan Carlos Varela, the president of Panama from 2014 until this past summer. Upon assuming office, he set the plan into motion, holding a press conference a few blocks from the home Argentina would soon leave behind to announce an investment of more than $500 million to “change the face” of the city. To address decades-old social problems, Varela had resolved to remove the residents, demolish hundreds of historic buildings, and turn what remained into a business district rebranded as Puerto Libre, a sort of open-air mall where tourists disembarking from cruise ships could drink and purchase souvenirs, duty-free. Then president Juan Carlos Varela arriving at Altos de Los Lagos to initiate the groundbreaking for a new school to accommodate the influx of children from Colón. The school is scheduled to be completed in 2020.

The renewal was beginning in earnest only now, five years later, with the forced displacement of five thousand families from the city center, that grid of splendid buildings turned to ruin. A housing project called Altos de Los Lagos, which the government refers to as “New Colón,” was built by Odebrecht, the Brazilian conglomerate that spawned one of the largest corruption scandals in recent history, distributing nearly $800 million in political kickbacks and bribes throughout Latin America. On a five-hundred-acre plot, the company built 167 apartment blocks of a few floors each, with outdoor stairwells and cramped bedrooms. New Colón looks something like a cheap toy, with crucial pieces missing.

The day after we met, Argentina was delivered to this complex from her former home in the old city center. The first thing she did was register with the local government office and sign a home-loan agreement, under which she must pay $71 per month. A social worker then accompanied her to her new apartment, where she struggled with her boxes and plastic bags. “Everything hurts, but there’s no pharmacy here,” she said. “As soon as I can, I’ll go back to Colón to buy pills and food.” A woman carries water from a public spigot to her home in a condemned multiple-family unit. This is a daily process for most Colón residents. The remains of a building in the center of Colón, close to the corner of 9th Street and Martínez Alley. A typical home in La Playita

Colón is now a devastated terrain. “This used to be the police station,” a man with dreadlocks told us, gesturing to an empty structure between 11th and 12th Streets. “This used to be the Abel Bravo School,” said an older woman, standing in front of a national monument that has been commandeered by the homeless. To these residents, New Colón still exists only as a possibility, a place where there may one day be a pharmacy, a library, churches, schools.

“I told them that I don’t want to go over there,” said a young woman named Sabri, whom we met at a temporary shelter for those waiting for new housing assignments. “There, you’ll get in trouble.” There have been reports of violence and criminal activity in Altos de Los Lagos. “They tricked us,” a hairdresser named Tamy said. “You know why they tricked us? They said ‘renovation,’ and what they want is to get us all out of here.” At one of the public information sessions for displaced Colonenses, a young man in a yellow T-shirt pointed out the obvious: “They want to kick us out because they stigmatize us. They don’t want us here.” 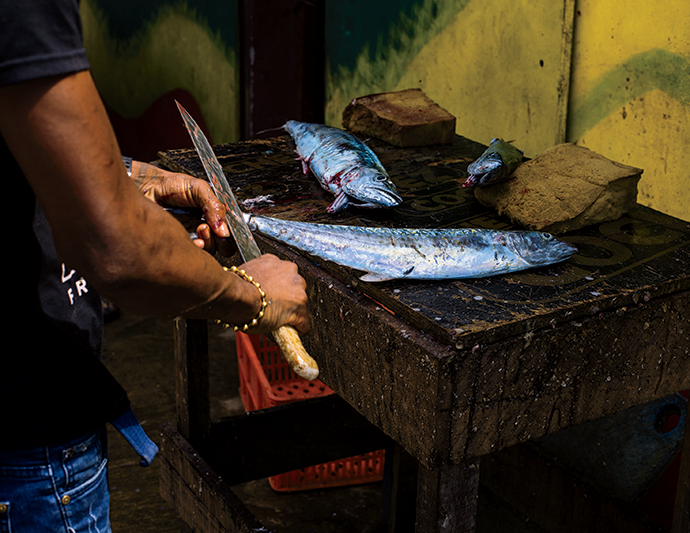 A fisherman cleans a fish at a restaurant in La Playita 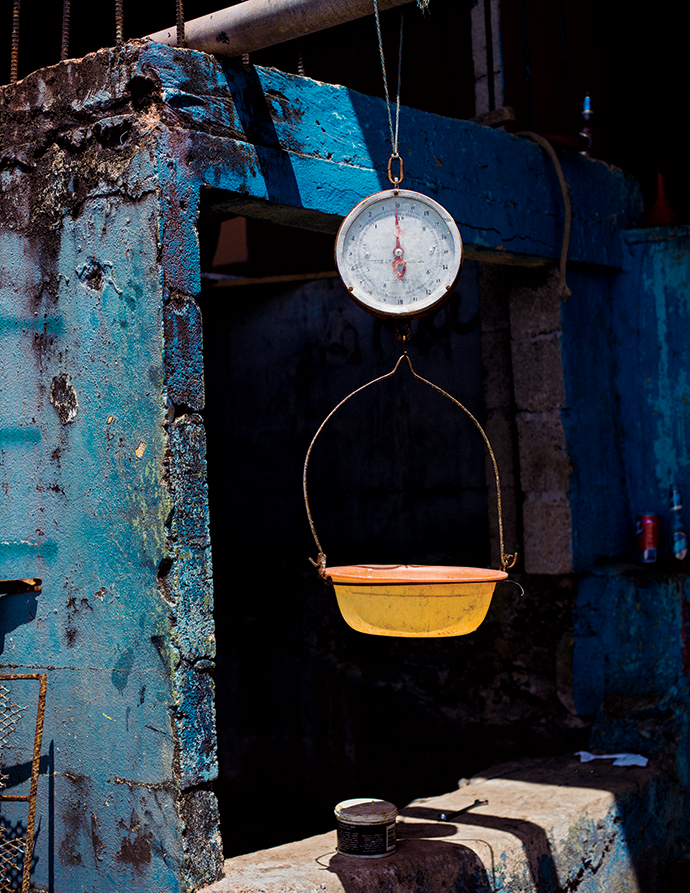 A scale by the docks Jorge, a carpenter, in his workshop on Meléndez Avenue between 11th Street and 12th Street. He refuses to leave Colón because there are no employment opportunities in the vicinity of Altos de Los Lagos. Edie Del Cid and his son preparing to go fishing off the coast of La Playita. If they are moved inland, he will be too far from the sea to continue his trade, which has been practiced in his family for generations.

José Luis is a forty-four-year-old fisherman in La Playita, a small beach community of wood and sheet-metal houses on the coast. For the past twenty-two years, he has gotten up at 4 a.m., readied his boat, and gone out to sea. That is his life—measuring the weather, tending his fishing lines, looking for sardines—and he doesn’t know how to do anything else. “They gave each family three hundred dollars to get them to leave,” he told us. “As soon as they leave their homes, they knock them down.”

Altos de Los Lagos is too far inland for José Luis and his peers to continue fishing. So in response to the government’s efforts, he enlisted fellow fishermen and began resisting, reaching out to the press and meeting with state officials. “If they mess with my fishing, what will I live on?” he asked. “Who is going to give me work? Are we supposed to go out and steal?” We were sitting in a restaurant, while, outside, employees of the Ministry of Housing, accompanied by dozens of policemen in camouflage fatigues, tore down the locals’ shacks. Erica Galván sweeps the floor at La 18, a transitional shelter where she and her family were placed after leaving La Playita. They are waiting on permanent housing in Altos de Los Lagos. A member of Argentina’s family helps her move into her apartment in Altos de Los Lagos.

José Luis said one official had described plans for a military base and a theme park at La Playita. The official had offered again to relocate the residents to New Colón, but the fishermen said no. “We have to wait,” José Luis said now. “It’s time to wait.” So they will wait to see what the new government, which took office this year, decides. The last holdouts in a razed city, they will wait for a voice offering some form of assurance. “We have to wait,” he said, “for something we can trust.” Argentina’s family, along with government employees, move her things into her new apartment in Altos de Los Lagos. Relocated families are required to purchase their new apartments by signing a loan agreement with a bank. Paying the monthly mortgage has proved difficult for a population that is largely unemployed. 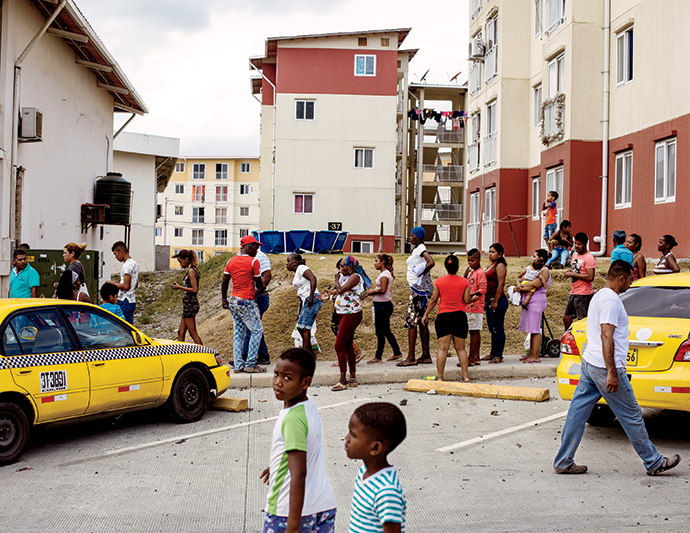 New residents of Altos de Los Lagos stand in line waiting for government-subsidized rice, which is available once a week. New residents of Altos de Los Lagos stand in line waiting for government-subsidized rice,
which is available once a week. Below: A fruit and vegetable truck, one of the few ways to purchase fresh produce

Rose Marie Cromwellis a photographer based in Miami. Her book, El Libro Supremo de la Suerte, was published in 2018. Sol Lauría is the former editor of La Estrella and was a contributing reporter to the Panama Papers.

From the
December 2019 issue