What would Frank Church say about the Snowden Affair? 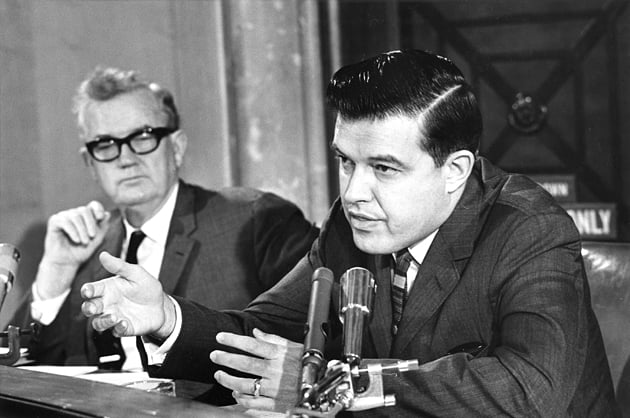 The most surprising thing about Edward Snowden’s historic leak of top-secret intelligence documents is that anyone has been surprised at all. The National Security Agency (NSA) has brought us within view of a totalitarian America, we are told. The largest spying organization in the history of human civilization, arguably the vastest and most incomprehensible creation of the United States federal government, has finally gone too far. They are tracking our phone calls. Facebook and email messages have been handed over. The status of our text messages cannot be definitively vouched.

The story itself is juicy, too, its details bursting with cinematic flavor: the Hong Kong hotel, the man with the Rubik’s Cube, the Icelandic immunity uncertainty, and the lithe libertarian girlfriend in Honolulu, her young love sacrificed for Truth. Snowden’s age and overall bearing give him the air of a technocratic Millennial martyr, but strip away the graphite patina of metadata, supercomputers, and yottabytes, and you see echoes of earlier controversies. We’ve been here before.

In 1975, a popular fourth-term[*] Democratic senator from Idaho named Frank Church was serving as chair of the Senate Foreign Relations Committee. After he learned that letters he’d sent to Russia had been intercepted by government snoops, he was outraged. “It was an affront to his privacy,” says Pat Shea, a committee deputy director under Church , “an affront to the separation of powers.” Church convened and chaired a series of committees that shed light on what was sometimes referred to as the “No Such Agency,” a government body formally created in 1952 by President Truman that until 1975 had undergone zero congressional oversight.

The Snowden Affair is a “rerun” of issues first uncovered during the 1970s, though these problems trace back to the earliest American efforts at espionage, says Shea. Between 1975 and 1976, the Church committees produced more than a dozen reports detailing the illegal activities of the NSA, CIA, and FBI, which included opening mail, intercepting telegrams, planting bugs, wiretapping, and attempting to break up marriages, foment rivalries and destroy careers of private citizens. “We thought we put a stop to this wholesale collection of information on Americans forty years ago,” says Peter Fenn, another former Church staffer.

Espionage and its attendant notions of paranoia and dishonor were established intrigues of the era. In 1970, before Nixon made eavesdropping the iconic crime of the decade, a Newsweek cover asked, “Is Privacy Dead?” Francis Ford Coppola’s The Conversation (1974) starred Gene Hackman as a tech-savvy private eye who runs around San Francisco in a membranous trench coat, penetrating various barriers to privacy before eventually succumbing to the paranoia inherent to his work. Later that year, Seymour Hersh and the New York Times broke a bombshell about the CIA’s “family jewels” operations—a nefarious laundry list of overseas-assassination plots, break-ins, and surveillance of journalists (current Fox News commentator Brit Hume among them) and popular antiwar figures including Martin Luther King, Jr. and John Lennon.

The NSA grew apace with improvements in technology, and Cold War pressures built an unstoppable institutional inertia. By the mid-1970s, it was using a wafer-thin device that could pick up and isolate twenty-five distinct conversations in a room of fifty people. According to James Bamford’s definitive history of the agency, The Puzzle Palace, by the early 1980s, the NSA was collecting, recording, and storing all Soviet transmissions — not just military or diplomatic or radar messages, but everything being broadcast, wired, typed, or spoken in Russian. This so-called “vacuum cleaner” approach became the norm for American surveillance, feeding an inexorable hunger to trawl as broadly and deeply for information as possible.

According to an internal report written by NSA historian George Howe and declassified in 2007, the NSA has had “responsibilities exceeding its ill-defined powers” since it was a military outfit known as the Armed Forces Security Agency (AFSA) in the early 1950s. The revelations that the government had ordered Verizon to turn over bulk call logs of millions of customers, and that the NSA’s PRISM program had, with the participation of tech companies, gained access to private electronic communications was scandalous, but far from unprecedented; in the years after World War I, Herbert Yardley, the pioneering codebreaker and founder of the proto-NSA Cipher Bureau, coerced Western Union and Postal Telegraph into sharing private international telegrams. The secret arrangement expanded after World War II to include RCA Global and ITT World Communications, helping the government copy and store ever greater troves of data, first on reels of punched paper and then on magnetic tape. The program, which ran from 1945 to 1975, was codenamed SHAMROCK, and according to a report written in 2007 by former CIA Inspector General Britt Snider, it was “known only to a few people within the government.” The Church Committees brought a swift end to the decades of relative autonomy and the legacy of abuse that resulted. During the Vietnam era, the abuses expanded, as the CIA teamed with the NSA to infiltrate domestic antiwar groups. One of the most egregious operations, code-named Chaos, saw eleven undercover agents grow out their hair and join the ranks of hippie activists to help build extensive case files on more than 7,000 peace protesters. In his exhaustive CIA history, Legacy of Ashes, Tim Weiner writes that the mischief was guided by President Lyndon Johnson and a handful of congressmen, who were determined to prove that Communists were behind the peace movement and the major 1967 race riots in Detroit, Newark, and more than a dozen smaller cities nationwide.

The NSA, Church wrote in a final committee report, “could be turned around on the American people, and no American would have any privacy left.” His prescribed solutions sound staunchly conservative by today’s standards. “The root cause of the excesses,” he wrote, “has been [the] failure to apply the wisdom of the constitutional system of checks and balances to intelligence activities.” Based on the committees’ work, the Foreign Intelligence Surveillance Act was passed, in turn creating the FISA Court that oversees surveillance warrants. These reforms are still the strongest legal impediments to abuse of power by the intelligence community. But the Church Committee affected the country’s political culture in subtler ways. Even as Church stood for honor and openness, the secrets he uncovered revealed that the trust between Americans and their government wasn’t as strong as we’d wanted to believe.

Nearly forty years after Church, the NSA has grown to three times the size of the CIA. Partly in response to the gross intelligence failures of the years leading up to September 11, 2001, the physical infrastructure of surveillance has metastasized. In the Utah desert, the government is finishing construction on a massive data center — essentially a $2 billion external hard drive — that Bamford reports will use as much energy as every house in Salt Lake City combined.

When Pat Shea left the senate intelligence committee in 1976 to move back to Utah for work at a private law firm, a friend who worked for the CIA gave him a satellite photo of Salt Lake City. “Just know that we’ll always be watching,” the man joked. Shea left Washington wary of intelligence overreach, but he also believes, contra Snowden, that most of what the NSA is currently doing entails “reasonable law enforcement.” He also recognizes that since 9/11, there has been constant pressure to build a more powerful vacuum cleaner. Contractors like Snowden’s Booz Allen Hamilton have been brought in to offer the government more eyes and ears, earning billions for their services, and bringing us to an era when roughly 1.4 million Americans have top-secret clearance.

A Washington Post–ABC News survey this week found that, while a majority of Americans support today’s intelligence-gathering methods, two-thirds of them would also like Congress to hold public hearings on NSA activities. Faced with the question of how to balance freedom and security in what we like to think of as the most open society in the world, Frank Church and his colleagues preferred to err on the side of personal liberty. Shea worries that today’s hyperpartisan congress won’t enforce the checks and balances that are needed to keep rogue elephants in check. He is among a growing chorus calling for a new Church Committee, an independent commission comprised of intelligence-savvy officials who will put the ideals of open, fair and effective government above short-term politics. Church was “an ethical giant,” Shea says. “We now live, unfortunately, in a world of ethical midgets.”