Adjust
Share
The power of strength
by Jeff Sharlet,

1. One day near the end of 2014, a nineteen-year-old white University of Michigan student named Andrew Jacob was sitting in his dorm, thinking about the police. All he seemed to hear that fall were complaints: about the cop who strangled unarmed Eric Garner, the cop who shot unarmed Michael Brown, the cop who killed twelve-year-old Tamir Rice. Black lives matter, sure, Jacob thought, but what about blue lives? Jacob, who grew up in an affluent Detroit suburb, was not from a police family and had no interest in going into law enforcement, but his father had recently started a scholarship for children of police officers, and one of his childhood friends had become a cop. Jacob’s friend told him about the Thin Blue Line—a term of police pride representing the line they believe they hold every day between chaos and order. Why not, Jacob wondered, give the police a flag to wave? That they had one—red, white, and blue—didn’t occur to him. 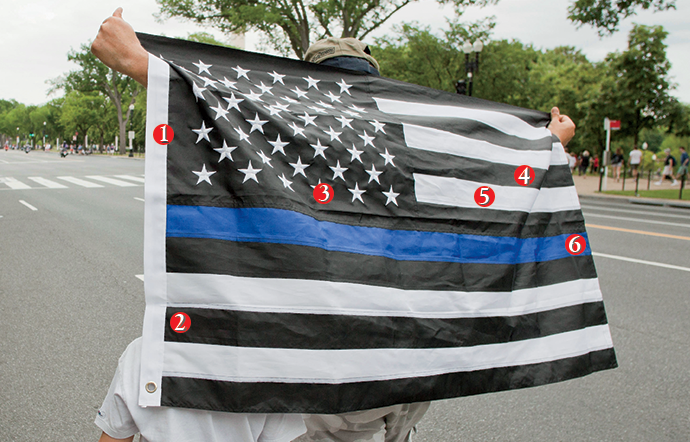 2. A flag for law enforcement supporters already existed: a blue stripe across a black field. Jacob told me that on that flag, popular with police enthusiasts throughout Europe and Australia, the black represents fallen officers—but he preferred the American exceptionalism of the black, white, and blue and its more pointed meaning. “The black above represents citizens,” he said, “and the black below represents criminals.” That those on the wrong side of the line are typically citizens themselves doesn’t bother Jacob, who has built a thriving business, Thin Blue Line USA. Since 2014, he has sold some 50,000 flags, as well as T-shirts, hats, and hoodies. He also sells products inspired by the Punisher, the Marvel Comics antihero who appeared in 1974 as a Vietnam veteran waging war on urban crime at home. Instead of capturing criminals, he kills them. Cross the Punisher’s line, Jacob explained, “and you’ll be served.” Vengeance, in this fantasy, transcends politics and even the rule of law. Jacob thinks of the police flag as like Old Glory, above faction—despite the fact that the Thin Blue Line leaches its bright hues for a darker vision of threat and violence.

3. The Blue Lives Matter movement, which began after the December 20, 2014, slaying of two New York City police officers, soon adopted the Thin Blue Line flag. The murders were the catalyst for what quickly became a rebuttal to Black Lives Matter, its insistence that we pay more attention to killer cops than to cops killed in the line of duty. And the flag symbolized an even deeper sense of peril among its admirers, those who mix Thin Blue Line memes with messages about fighting the Islamic State, “illegals,” and socialism, the “chaos” represented by the black bars below the blue line. Those stripes also recall media reports on police violence, in part because the media itself is increasingly seen as an enemy of law and order. The blue line poses the old question of organized labor—which side are you on?—as a loyalty test. Loyalty to what? Authority. Authority for authority’s sake, as seen in personal variations of the flag that soon proliferated: a Christian cross bisecting its stripes, bullets instead of stars. The flag began to appear alongside the other standards of lovers of the strong hand: the yellow snake of “Don’t Tread on Me,” the Stars and Bars of the Confederacy, and even—most notably at the August 2017 Unite the Right protest in Charlottesville, Virginia—the swastika’s crooked cross.

4. Chat logs from the Charlottesville organizers reveal that savvier white supremacists know that swastikas undermine the breadth of their appeal. The Thin Blue Line runs less risk of alienating potential supporters; the American flag, filtered through a lens darkly, might send just the right message. For those who display the flag as an angry assertion, in the shape of a skull or emblazoned across the barrel of a handgun, the colors evoke a mixture of menace and patriotism, the peril of a nation under siege by disloyal liberals and salvageable only by what Donald Trump describes as “the power of strength.” That tautology abstracts the desire Trump usually puts in cruder terms, as when he told police on Long Island, New York, about a “rough cookie” on the Chicago force who had assured him that “all the bad ones” could be rounded up in, “if you gave me the authority, a couple of days.” Trump liked that. “You see these thugs being thrown into the back of a paddy wagon—you just see them thrown in, rough—I said, please, don’t be too nice.” In August, not long after that speech, a Trumpist Twitter account began offering free Thin Blue Line flags to its followers.

5. The slogan was not always so partisan. In Errol Morris’s acclaimed documentary about the murder of a policeman, The Thin Blue Line (1988), it evokes the risks police undertake and the tragedy of the officer’s murder. And yet in the film, the phrase is invoked by the prosecutor who successfully pursued a death sentence for the wrong man; the movie, in fact, helped overturn that conviction. Even here, “the thin blue line” stands for the brute black-and-white politics of “law and order” rather than the long, gray pursuit of actual justice. Twenty-two years before the Morris film, the director William Friedkin, of Exorcist fame, made a lesser-known documentary of the same name. An indictment of “irresponsible political movements” and open borders thematically indistinguishable from today’s Fox News, the film opens with a violent montage of blinking lights, corpses, and heroin molecules. “Never before has any country demanded so much of its police,” warns the voiceover by Van Heflin, a star of westerns and war movies. “And never before have the police been so criticized and condemned.” The footage that follows is meant to convey the surge of crime the Thin Blue Line barely restrains. The cops are white, the men they are beating are black. Even so, the cops feel like they are on the defensive. “We aren’t winning anything,” one officer says. Another, Mike—“a tough, old-school cop, he has twice fought charges of police brutality”—closes the film by accosting a five-year-old black boy. “You like the policemen?” he snaps. “You afraid of the policemen?” The boy nods. “Very good,” Mike says, and swats the kid’s head.

6. The scene could come right out of today’s Blue Lives Matter meme factory. Along with images of warriors, weapons, and German shepherds, pictures of children—often little blond girls—hugging cops infuse the movement with an ominous sentimentalism. It’s this combination, the fetish for strength and the idealization of racially coded innocence, that has historically led authoritarian movements to subvert the rule of law in the name of order. Eventually, the new order becomes law. Last year, policymakers across the United States introduced dozens of bills proposing that police be included under hate-crime protections. Responding to communities that have attempted to regulate the Thin Blue Line flag, a law proposed in Ohio would afford it a favored status not extended to the flag of Black Lives Matter—which features nothing but the movement’s name, that singular assertion of a human dignity that does not depend on the force of arms.

Jeff Sharletis a contributing editor of Harper’s Magazine and an associate professor of English and creative writing at Dartmouth College.