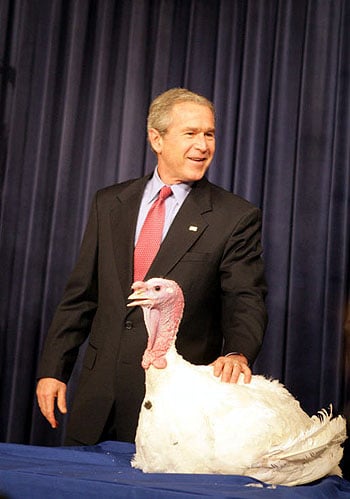 General George Casey, the top U.S. commander in Iraq, presented a plan for the withdrawal of U.S. troops from Iraq to Secretary of Defense Donald Rumsfeld.CNN.comSaddam Hussein, on trial with seven other defendants for killing civilians in 1982, complained to a judge about being denied a pen and paper;CNN.comIraqi Prime Minister Ayad Allawi said that human-rights abuses in Iraq are “the same . . . and worse” than they were under Saddam Hussein.Guardian UnlimitedGunmen in Baghdad killed a Sunni Arab chief, his three sons, and his son-in-law,BBC Newsand south of Baghdad thirty people were killed when a bomb exploded outside a hospital.BBC NewsIt was reported that President George W. Bush had, on April 16, 2004, revealed to British Prime Minister Tony Blair a plan to take “military action” against the headquarters of the Al Jazeera news network in Doha, Qatar. According to a leaked transcript, Blair talked Bush out of attacking the television station. The White House called the report “outlandish and inconceivable,” and Blair called the report a “conspiracy theory.” David Keogh, a former U.K. Cabinet Office official, was charged under the Official Secrets Act with leaking the memo, and U.K. Attorney General Lord Goldsmith warned British media that any further reporting based on the leaked memo could be subject to criminal charges. Al Jazeera demanded an inquiry.The Daily MirrorThe Toronto StarThe GuardianThe Toronto StarNews.TelegraphAfter three years in prison, U.S. citizen Jose Padilla was indicted on charges that he conspired to murder individuals overseas and provide support for terrorists; no mention was made of prior accusations that Padilla intended to use a “dirty bomb” or claims that he conspired with Al Qaeda to blow up U.S. apartment buildings. “The indictment,” explained a former Justice Department official, “is doubtless a strategy by the Bush Administration to avoid a Supreme Court ruling that would likely hold that U.S. citizens cannot be detained incommunicado as enemy combatants if they are detained on U.S. soil.”The Washington PostIt was revealed that the United States imprisoned terrorism suspects in Kosovo, at a prison described by the Council of Europe’s Human Rights Commissioner as “a smaller version of GuantÃ¡namo“;Forbes/AFXthe Netherlands threatened to withdraw its support for U.S. military missions if the United States continued to refuse to acknowledge its network of secret Eastern European prisons. “The U.S. should stop hiding,” said Netherlands Foreign Minister Ben Bot. “It will all come out sooner or later.“Al JazeeraGeorge McGovern said that “all kinds of mutual friends” had told him that George Bush Sr. had been against the Iraq war from its beginning.The Alan Colmes Show (via Crooks and Liars)The Supreme Courtâ??s marble facade began to crumble.The New York TimesAugusto Pinochet turned 90.BBC News

Violent shopping incidents occurred in Hamilton Township, New Jersey; Elkton, Maryland; Grand Rapids, Michigan; Orlando, Florida; and Sunrise, Florida, where a 72-year-old woman was trampled.WTOPNews.comNBC10.comThe Miami HeraldReutersKYW.comAt the Macy’sThanksgiving Day Parade, the M&M’s Chocolate Candies balloon knocked parts of a street lamp onto a woman and child. Both were briefly hospitalized. “We should be thankful,” said New York City Mayor Michael Bloomberg, “none were more seriously hurt.”APRuth M. Siems, who invented Stove Top Stuffing (U.S. patent no. 3,870,803), died of a heart attack at 74.New York TimesPresident Bush issued pardons to two turkeys, which were then sent to Disneyland to serve as grand marshals at a parade. “The granting of the turkey pardon,” said the President, “is not a responsibility that I take lightly.” The turkeys, Marshmallow and Yam, earned their pardons when they beat out Democracy and Freedom in an online poll.The White HouseA Vermont teacher was in trouble for testing students with liberal vocabulary questions. “I wish Bush,” read one question, “would be (coherent, eschewed) for once during a speech, but there are theories that his everyday diction charms the below-average mind, hence insuring him Republican votes.”Boston.comIn South Koreageneticist Hwang Woo-suk, who cloned an Afghan hound named Snuppy, resigned as chairman of the World Stem Cell Hub after it was discovered that he had used the eggs of women from his research team in experiments. “We needed a lot of ova for the research,” he explained, “but there were not enough ova around.”BBC NewsThe British government was investigating reports that up to 50 babies each year survive being aborted.Times OnlineA former student at Oxford University was in trouble for calling a policeman’shorse “gay.” “Sam was adamant,” said an eyewitness, “his equine gaydar was accurate.”The Oxford StudentThe Vatican announced that men with “deep-rooted homosexual tendencies” may not become Roman Catholic priests. Men who experienced “transitory” homosexual tendencies at least three years ago, however, may.The Lost Angeles TimesThe community council of Perthshire, Scotland, forced a developer to change the layout of his housing development so that it would not disturb fairies.Times Online

Scientists at Rutgers University in New Jersey said that global warming had doubled the rate of sea-level rise over the last 150 years, and there was nothing that could be done to stop it.The GuardianSeventy-seven people died in India when two passenger buses were swept away by floods,BBC Newsand state-controlled Venezuelanoil company Citgo announced that it would provide over 11 million gallons of oil to poor people in Boston and New York.The Sydney Morning HeraldIt was revealed that the investigation into illegal payoffs made by lobbyist Jack Abramoff involves not only RepresentativeTom DeLay (R., Texas), but Representative Bob Ney (R., Ohio), Representative John Doolittle (R., Calif.), Senator Conrad Burns (R., Mont.), 17 current and former Congressional aides, and two former Bush Administration officials.ReutersRepresentative Randy “Duke” Cunningham (R., Calif.) confessed to taking $2.4 million in bribes and resigned from office.CNN.comA 1,600-inmate faith-basedprison opened in Crawfordville, Florida.Gainesville.comDiepreye Alamieyeseigha, governor of Bayelsa State, Nigeria, denied that, in order to avoid money-laundering charges, he had fled from the U.K. disguised in a dress.BBC NewsEarthquakes struck Iran and China,The Arizona Daily Starand Somalia’s transitional government awarded U.S. firm Topcat Marine Security $50 million to fight pirates for two years.BBC NewsChris Whitley, Pat Morita, and George Best died.Rolling StoneThe StarHerald SunA German woman named Petra Ficker threw her husband, Frank Ficker, out of the house after her parrot cried out the name of Mr. Ficker’s mistress, Uta. “It’s just me and my parrot now,” said Petra.All Headline NewsA new nasal spray made women want sex.Local6.comIn Australia, bestiality charges were dropped against financier Brendan Francis McMahon, because prosecutors were unable to prove that his penis penetrated any rabbits. McMahon, who told a psychiatrist named Steven Allnutt that he could “communicate with animals through a third eye,” was still charged with mutilating 17 rabbits and one guinea pig.The Sydney Morning HeraldFormer FEMA Director Michael Brown announced that he was starting a disaster-preparedness company. “My parents,” noted Brown, “are still proud of me.”CNN.comFormer Canadian Minister of Defense Paul Hellyer called on Canadian Parliament to hold hearings on the best way to deal with extraterrestrials. “I’m so concerned about what the consequences might be of starting an intergalactic war,” said Hellyer, “that I just think I had to say something.” PRWebA Nevada man was arrested for stealing $200,000 worth of Legos,MSNBC/APand a London man was stabbed to death by someone in a Santa hat and beard.BBC NewsSingapore fired its executioner, Darshan Singh, after his identity was revealed in the media. Singh, who conducted more than 850 hangings over 46 years, said that his last words to condemned prisoners were always: “I am going to send you to a better place than this. God bless you.”Sky NewsNews.com.auGerman scientists discovered a singing iceberg in Antarctica.Reuters